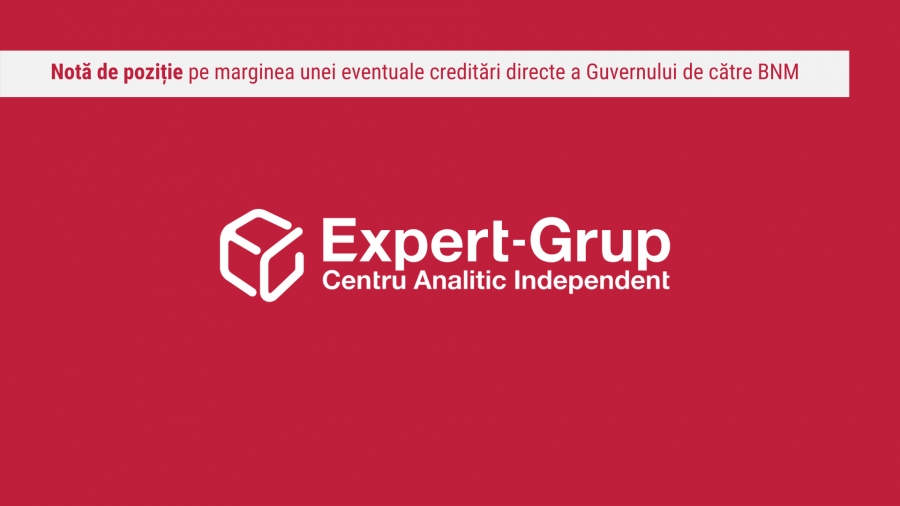 In the context of the ideas circulated by certain politicians regarding the contracting by the Government of a loan of up to 20 billion MDL from the National Bank of Moldova (NBM), we declare the following:

• Central bank direct crediting of the Government in Moldova is illegal. Article 41 of the Law on the NBM  expressly specifies the prohibition of lending to the state: “The National Bank shall not grant loans and guarantees in any form to the state or its bodies, including by purchasing state securities on the primary market or by granting overnight loans”.

• A potential loan from the NBM to the Government, especially in such a large amount (about 10% of GDP) will create inflationary pressures, depreciate the national currency, undermine economic growth, and result in fewer jobs and lower living standards of the population. The reason is that such a loan will force the central bank to print money, which will increase the volume of national currency without any coverage in the economy, while putting pressure on the national currency. To stabilise the situation, the NBM will have to sterilise this excess liquidity by tightening monetary policy and selling foreign currency from its reserves. This could worsen the current economic crisis in the Republic of Moldova, which will result in the loss of tens of thousands of jobs and the bankruptcy of thousands of enterprises.

• The image of the Republic of Moldova with its potential creditors and investors, both in the country and abroad, will be worsened, which will make it even more difficult to attract financing on favourable terms, as well as attract foreign and local investments. Direct lending to the Government by the central bank has no positive precedents worldwide. Neither Romania, nor other countries in the region used such measures, which are viewed with the utmost scepticism by investors, creditors and the entire international community (not to be confused with "quantitative easing" implemented by the Federal Reserve in the US and by ECB in the euro area, which differ significantly from monetary lending or direct lending to the Government by the central bank discussed in Moldova; also, these examples are not comparable to Moldova given the difference in economic competitiveness and resiliency). Therefore, a potential direct loan from the NBM to the Government will increase the country's risks and worsen the perception of the Republic of Moldova by investors, creditors and development partners. In particular, it will deprive the Republic of Moldova of other forms of financing, both with immediate and long-term effects, namely:

o will undermine the prospects for a memorandum with the International Monetary Fund, which will affect other preferential financing from the European Union and other strategic partners of the country;

o will lead to higher interest rates on loans contracted internally and externally and, respectively, to higher budget costs for contracting such financing;

o will compromise the idea of issuing Eurobonds on foreign capital markets;

o will undermine investment attractiveness, especially for strategic investments, due to higher inflationary, foreign exchange and macroeconomic risks, which are taken into account most seriously by large investors;

o will destabilise the balance in the financial system by increasing interest rates and inevitably increasing the cost of loans granted to the population and companies;

o will question the refinancing of external debt if this mechanism is contrary to the rules promoted by the IMF;

o will create a dangerous precedent for future political pressures on the central bank.

• The initiative will generate losses in the state budget. As mentioned above, against the background of the country’s higher risks and a more restrictive monetary policy to reduce the volume of uncovered money in the economy, the costs of loans contracted by the Government will increase. This will immediately lead to higher interest rates on government securities that the Ministry of Finance uses on a permanent basis to refinance previously contracted loans, as well as to finance the budget deficit. Respectively, the cost of servicing the state debt will increase, which means that hundreds of millions of MDL, instead of being directed for investments or social payments, will be spent on paying higher interest on the state debt. In addition, if the NBM’s loan to the Government is contracted at a below-market interest rate, it will affect the capitalisation of the central bank, which will require transfers from the state budget to recapitalise it.

• The NBM’s ability to maintain the country's macro-financial stability will be affected. A potential loan by the NBM to the Government will lead to a reduction in the volume of foreign exchange reserves. Therefore, the NBM will have fewer opportunities to cushion any negative shocks to the economy. For example, it will not be able to prevent a potential sudden depreciation of the national currency through the sale of foreign currency from its foreign exchange reserves in the event of a lower supply of foreign currency (e.g. reduction of exports or external financing) or a higher demand for foreign currency (e.g. speculative attacks or population’s fears about the stability of the national currency).

• Last but not least, the independence of the central bank will be undermined, which will exacerbate all the negative consequences mentioned above. In its recently published position note, the NBM stated that it does not support the idea of direct lending to the state, due to its illegality and associated macroeconomic risks. Therefore, a potential coercion of the central bank to lend to the Government, including under the pretext of a state of emergency, would be a direct interference in the activity of the monetary authority, and a blatant violation of the principle of independence of the central bank under political pressure. This will further undermine confidence in the national currency and aggravate the country’s risk, while exacerbating all the negative effects mentioned above.

In view of the above, we urge the politicians to resort to legal and feasible sources to finance the support programmes for the population and companies, which are so necessary and expected, especially in the context of new restrictions and the state of emergency. In this regard, we reiterate the Expert-Grup’s recommendations made at the beginning of the pandemic crisis and that are still valid today, based on which a similar amount of money (about 20 billion MDL) can be mobilised without running into macroeconomic risks:

• Relax the monetary policy by reducing the mandatory level of reserves from the current 30% (for national currency and foreign currency), which we consider very high and restrictive given the current crisis and financing needs, down to 15%. This would allow to mobilise about 10-11 billion MDL to the accounts of commercial banks, which could be invested in state securities. Given the fact that the current inflation level is well below the target of the central bank, monetary policy easing does not pose major risks.

• Increase the issue of government securities. Given the excess liquidity of about 10 billion MDL in the banking system, which could be doubled by decreasing the level of required reserves (see above), it is appropriate to increase the issue of government securities in order to redirect this excess liquidity to an extensive programme for the support of companies and the population worth up to 20 billion MDL.

• As the liquidity in the banking system is eventually consumed, the NBM could purchase government securities on the secondary market (to make more active use of REPO-type operations), in order to support the Government in financing the anti-crisis programme.

• In order to support the channelling of liquidity from the banking system to the real sector of the economy, it is necessary to issue state guarantees for loans financing the cash flow granted to companies whose activity has been stopped by the restrictive measures established during the state of emergency.

• Improving relations with the development partners will allow to access about USD 530 million agreed under the programme with the IMF, EUR 50 million as part of the macro-financial assistance from the EU and other external resources that can be obtained in exchange for reforms to be undertaken by the Republic of Moldova under international agreements. This would allow the mobilisation of over 10 billion MDL under preferential conditions.

• The need for resources should be dictated directly by the developed programmes and projects, well anchored in the objective realities and consulted with the general public, business community and civil society. The need for funding should not arise as a result of populistic statements of politicians.