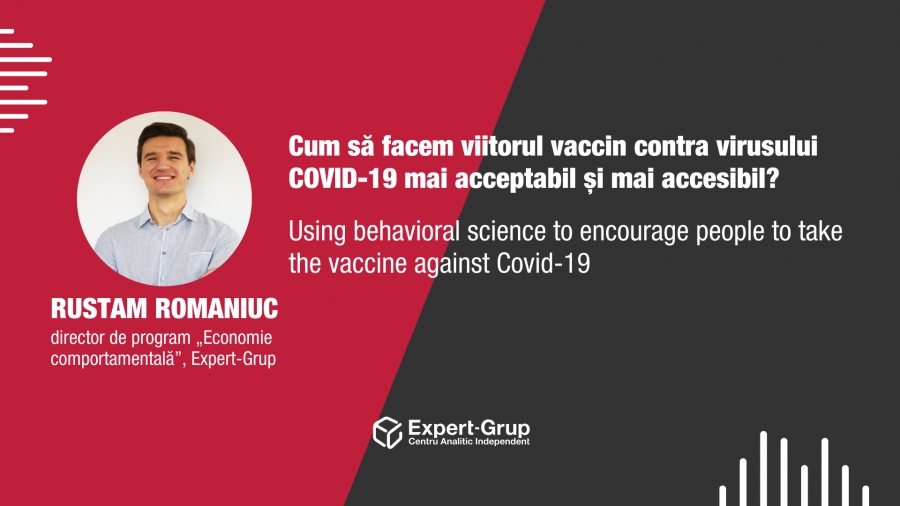 As effective vaccines may soon be approved by the US and European Union’s health authorities, it is important to stress that these can be a powerful weapon against Covid-19 only if people take them. There has always been reluctance around vaccine uptake. However, recent surveys  show that the skepticism has been on the rise in the last few months and is sufficiently high to render community immunity a challenging goal.

Differences in acceptance rates range from almost 90% (China) to less than 55% (Russia, France). With missing data from Moldova, one can only speculate about the acceptance rates. However, it is reasonable to expect that the acceptance rates would not differ much compared to Russia, which is one of the countries with the most pronounced skepticism toward vaccination.

The high levels of reluctance to take the vaccine against Covid-19 need to be taken into account by public authorities before they launch official campaigns promoting vaccination. Promotional messages coming from public authorities may backfire. In effect, these may increase even further the number of those who refuse to take the vaccine, especially when there is low trust in messages coming from central authorities. Because vaccination is a highly controversial issue, public officials cannot use the standard regulatory tools: impose sanctions for those who don’t comply or render vaccination mandatory. These measures are likely to reduce people’s trust in central authorities and spur further opposition toward vaccination.

It is of utmost importance for public authorities to (i) better understand the motives that drive people’s refusal to take the vaccine, and (ii) to design policies that are likely to change the specific beliefs and attitudes against the vaccine. Behavioral science can be a powerful tool to understand what’s holding someone back, what sub-populations have different concerns, and try to tackle those things. For example, when it comes to changing behaviors, one simple policy with a potentially noticeable impact is to change the default option: instead of asking people to book an appointment at a nearby clinic, public authorities could work with employers to automatically book appointments for their employees, leaving them the freedom to opt-out. Results from previous behavioral studies on the take-up of vaccines show that this measure has the potential to dramatically increase the number of people who get a vaccine. A group of researchers from Ruthers University (USA) sent a letter to 408 university employees to inform them about a campaign of vaccination against influenza. Employees were divided in two groups (without knowing that). The first group received an email indicating the date, time and place where they had to be vaccinated. In other words, their appointment their appointment had been scheduled for them, but they could cancel it any time (opt-out). The other group received an email requesting them to choose a date to be vaccinated (opt-in). The results are show a significant effect of the opt-out option: 92% of the employees in the first group kept their appointment and therefore received a vaccine, while only 50% of those in the second group made the necessary appointment in order to be vaccinated.

Other behavioral interventions could be envisioned, depending on citizens’ motivations to refuse the vaccine. For example, knowing that a majority of citizens in one’s country are in favor of vaccination may motivate an individual to seek conformity and therefore to take it as well. The research in behavioral economics shows that one of the most powerful predictors of behavior is perceived social norms — what we think everyone else is doing. Country leaders – including the political class – often convey that in their behavior, their symbols. It is therefore important that early in the process our leaders publicly express their commitment to the science behind Covid-19 vaccines and that they be among the first ones to take it.

Public authorities could also use insights that have proved their efficiency in the context of blood donations or other civic duties, such as voting, where associations offer participants badges, stickers or bracelets so that they can signal to others that they donated their blood or that they performed their civic duty by voting. Such simple and cost-efficient tools could be used in the context of vaccination against Covid-19. The greater the number of citizens wearing badges signaling that they performed a civic duty by taking the vaccine, the greater the social pressure that may motivate others to follow through.

These tools that are based on social norms and people’s psychology are not the silver bullet. However, given that these are not costly to implement, the returns on investment, measured in the number of saved lives, can be extremely high. Their implementation can also raise ethical issues which should be addressed ex ante by integrating ethical considerations at the design stage in order to ensure the necessary transparency and to avoid that citizens may feel manipulated.