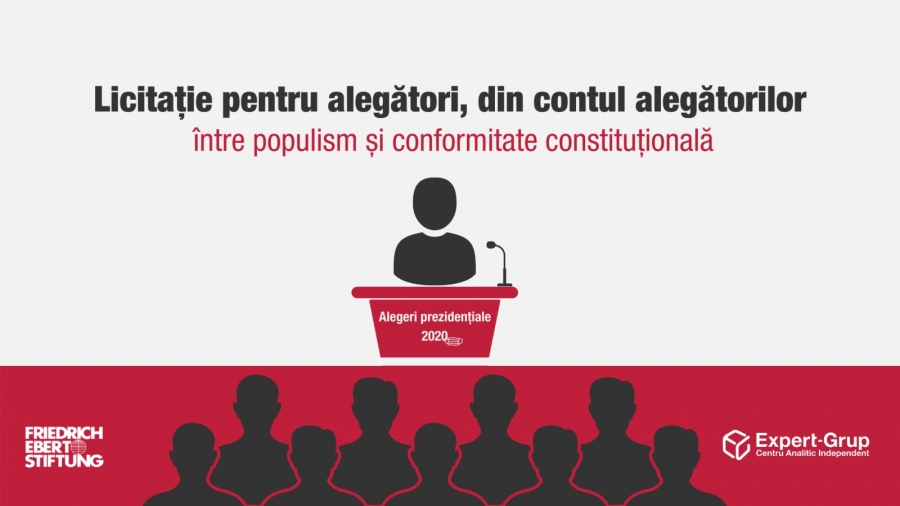 Electoral programmes are usually one of the main tools through which electoral contestants try to attract voters. In the case of Republic of Moldova, where politics consists more of a struggle between personalities than between doctrines, the electoral programmes have always been given less attention than in countries with democratic traditions. For example, in the current election campaign for the 2020 presidential election, only five out of eight electoral candidates have published their electoral programmes, of which only three candidates (Igor Dodon, Maia Sandu and Andrei Nastase) have presented relatively detailed electoral programmes. The programmes of the other candidates are brief or even superficial (1-2 pages), or limited to verbal promises.

The analysis of the electoral programmes and promises of the candidates for the position of President of the Republic of Moldova highlights their tendency to exceed the powers of this function provided by the Constitution. According to the Constitution, the Republic of Moldova is a parliamentary republic, which suggests that the key role in promoting policies and reforms belongs to the Parliament, while the President has limited responsibilities, mainly in the field of defense and foreign policy (Annex A presents a detailed list of powers of the President according to the constitutional provisions). Though the President has the right to legislative initiative, the spirit of the Constitution clearly suggests that the president’s areas of intervention are quite limited. In contrast to the latter, the electoral programmes and promises of the candidates in the 2020 presidential election are specific to the presidential state, and in some cases, they reflect features typical of a paternalistic regime where virtually all areas of state development depend on the president (from salaries, pensions and childbirth allowances to playgrounds, street lighting and water provision systemsin villages and towns). Therefore, the vast majority of presidential election programmes and promises do not comply with the constitutional provisions.

The vast majority of electoral promises in the social and economic fields are not financially feasible. In many cases, the promises remind of an auction by the electoral contenders (e.g. who promises a higher pension) and do not represent a real struggle between visions, doctrines or ideologies with regard to the country’s development or solution of the country’s major problems. Moreover, most of the time, the electoral candidates do not specify how they will mobilize the necessary financial resources, where they will get money from and what tools they will apply to implement the promises made. For example, according to the most conservative calculations, Igor Dodon’s electoral promises are estimated at about MDL 120 billion for the 4-year term, or 10-11 per cent of GDP and 37 per cent of the national public budget estimated for that period. Maia Sandu comes up with a programme of about MDL 50-55 billion or about 5 per cent of GDP; and Violeta Ivanov’s promise to increase the minimum pension to MDL 5,000 alone requires a financing of about MDL 25 billion per year or MDL 100 billion for the entire 4-year term. Obviously, in the context where over 90 per cent of budget expenditures are earmarked for recurrent activities, the budget deficit in 2020 is estimated at about 8 per cent of GDP, and the pension system is in deficit, the vast majority of these electoral promises are not feasible. Even though the external financing is mentioned, from the West and the East, this will not be enough, given the size of the electoral promises.

We urge the electoral contestants to engage in realistic electoral promises, to detach themselves from populism and to come up with complex visions regarding the role of the President in the development of the country. The electoral promises should be in compliance with the constitutional mandate (constitutional compliance), provide realistic instruments that would ensure their feasibility (e.g. funding sources, implementation tools, concrete targets) and be judicious for the balanced and sustainable socio-economic development of the country. At the same time, we condemn the irresponsibility of those electoral contestants who compete in promises, without taking into account the financial possibilities and the fiscal space of the country, as well as the mandate assigned by the Constitution to the president of the Republic of Moldova. We call on civil society and media to critically and thoroughly analyse, monitor and inform the general public about the essence of electoral promises and, subsequently, about their implementation. This would make the politicians more accountable and, in the long term, would increase the quality of the political class, which is one of the main preconditions for reforming and modernizing the country.