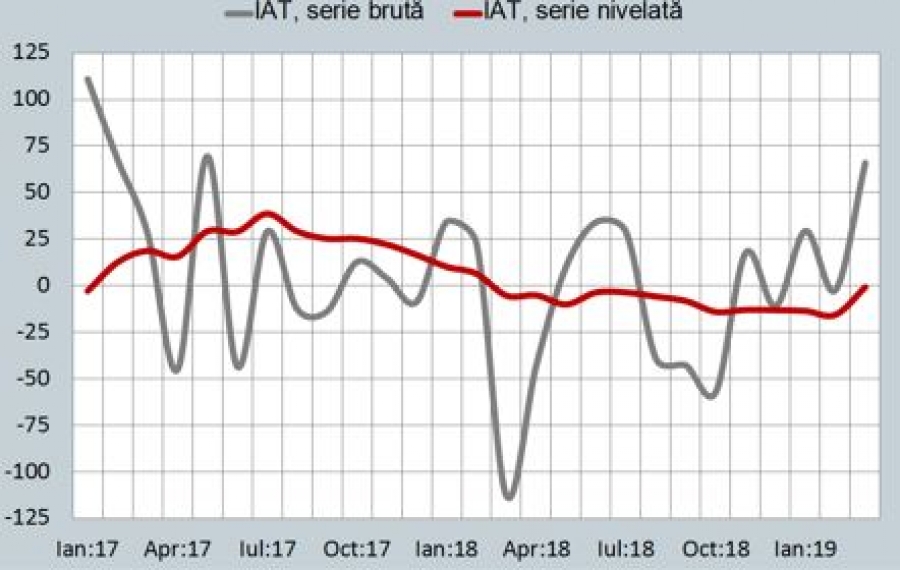 In spite of the economic stabilization after a period of deceleration, the economic conditions could worsen during the second half of the year. We’ve noticed a certain change in how the Early Warning Index (EWI), calculated quarterly by Expert-Grup, evolved during the first months of this year. After decreasing for a long period of time, the index changed its trajectory and started to grow. Thus, a number of monitored economic indicators show certain positive developments, but the risks persist. In particular, in Q1:19, the exports of goods started to grow again after the downward trends registered at the end of 2018. The lending to the private sector also grew in Q1:19 and in the context of the election campaign the Government increased the budget spending that had certain positive but temporary effects on consumption and economic growth. As a result, we expect a positive trajectory in the first half of the year: in Q1:19 the Gross Domestic Product could increase by about 4% y-o-y, and in Q2:19 the growth could exceed 5%.

At the same time, a series of risks for the economic growth persist on the background of external developments and adverse effects of the expansionary policies promoted by the Government in the electoral context. The remittances of Moldovan migrants have been decreasing since Aug:18. The lower inflows of foreign currency alongside a high trade balance deficit led to the depreciation of the national currency. The depreciation was also fostered by the higher budget spending in the electoral context, which stimulated the domestic demand and boosted imports, which implicitly resulted in a larger trade balance deficit. This development, along with the low harvests of many agricultural crops in 2018 will fuel the inflationary dynamics in 2019, which will generate important challenges for the central bank. The annual rate of inflation increased from 2.2% in Jan:19 to 3.2% in Apr:19 and by the end of the year it may reach 8-9%. Note that in addition to inflationary pressures, the Government’s expansionary policies will also push the budget deficit up – trend already visible in Q1:19. The greater inflationary risks and imbalanced public finances could result in tougher economic policies during the post-election period: the Government might increase the taxes, cut on budget expenditures and/or take more loans from banks, which will increase the cost of domestic Government debt and have negative effects on loans granted to the real sector. These developments will have adverse effects on economic dynamics, which may slow down in the second half of 2019 and throughout 2020.

Perpetuation of political instability is another risk factor for the economic growth. This is due to the suspension of many projects by private investors and development partners until the formation of the new Government, and the delayed reforms and economic stabilisation measures that are needed during the post-election period.