Informal Economy. Why do we lose land in the Chisinau city? 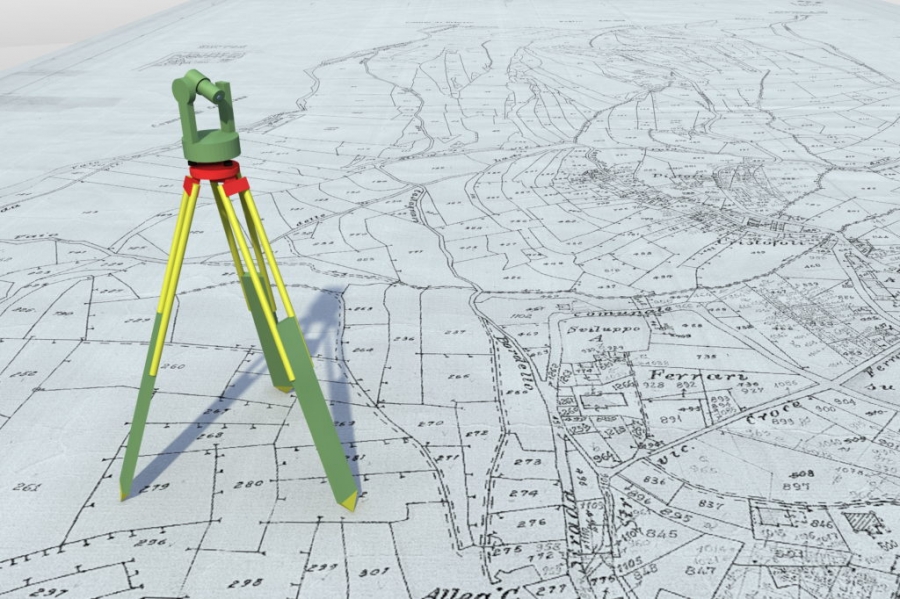 One of the most important resources for the development of Chisinau municipality is the land. Unfortunately, the way in which land is administered does not ensure their use in the best way to meet the needs of development of the Chisinau municipality. Multiple journalistic investigations, as well as public scandals, show that the management of municipal land, especially in recent years, is done in an "informal" way, with abusive takeovers of land from public and private domains, ineffective management of those in the municipal property, controversial decisions of the Chisinau Municipal Council. The subject of this commentary is the management of municipal land and why, year after year, we lose more and more land.

How much land do we have in Chisinau, which is its value and who owns it?

According to the data of the Agency for Land Relations and Cadastre, there are 9717 hectares of land in Chisinau city, of which 2390 ha are owned by the state, 1975 ha are private property, and the rest is municipal property. In its turn, the municipal property is divided into public and private domains, see Table 1.

The distinction between private and public domain ownership is that the former cannot be sold to private third parties and can only be used by the LPA to satisfy the general interests of the community of the territorial administrative unit. These can also include parks, lakes, roads and can only be alienated by court decision. The land belonging to the private domain is the land in the public ownership of the administrative-territorial unit, which have a well-defined purpose, other than the satisfaction of a general interest, see Table 2. The latter may be leased and/or sold. 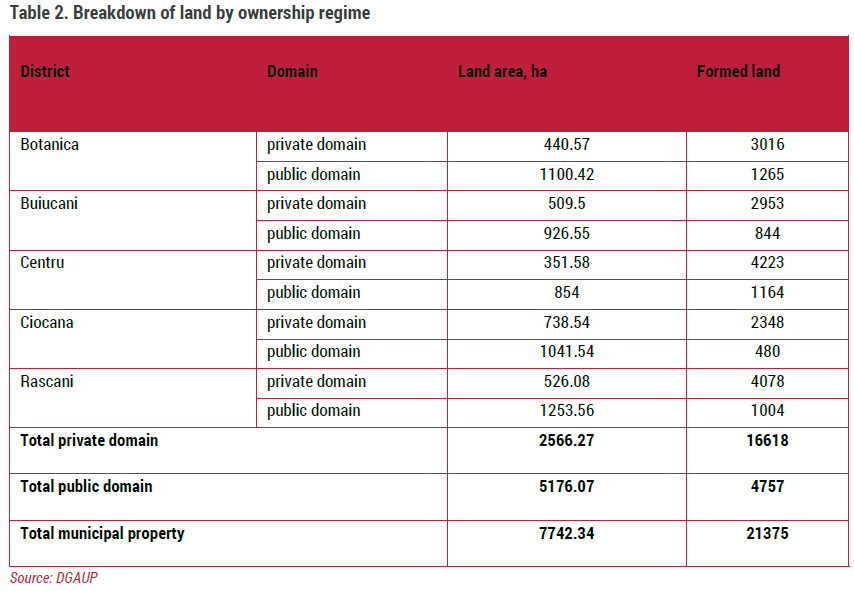 Why do we lose land in Chisinau?

A specificity of the Local Public Authorities is the availability of prerequisites for corruption, or the so-called administrative loopholes, a legal framework and practice that allow the municipal land transactions to take place in an informal setting by ad hoc rules. The most important are: lack of transparency in the management of municipal land, lack of land management strategy, gaps in the current legislative framework, which allow land to be leased without public tenders, just upon direct request. These prerequisites trigger the main risks of corruption in privatization of land as a result of the use of administrative resources, either through influence peddling or through administrative inaction (non-fulfilment of main duties by the responsible directorate). So, why do we lose land in Chisinau?

Because the Chisinau Municipal Council does not have a strategy to capitalize on land. The Chisinau Municipal Council, as well as directorates managing municipal land have no clear understanding of how such land will be managed. For example, if we were to judge based on the CMC's interviews and decisions over the last years, the common approach is to sell municipal land in the private domain to increase municipal revenue. This approach does not take into account that land is an asset whose value over time can only grow. If we sell tomorrow 1490.83 ha of municipal land in private domain at nominal price, we will get just over 4.9 billion MDL, whereas their annual lease will generate no less than 38 million MDL per year. Given that the value of land, with few exceptions, has increased in recent years, we can assume that its sale is not the most appropriate economic solution for the medium and long-term development of the city.

There is no information in the public space about the land fund. Another problem is the lack of information about available land. Although the application map.chisinau.md was launched in 2012, showing in real time the land structure by owner, free/occupied land and related economic relations, it is no longer operational for at least two years. Given that this resource was used by about 1240 unique monthly visitors, while the informal payment for such a service is 50 euros, we estimate the corruption risk at about 1.4 million MDL per year. The lack of this information system enables economic agents to actually acquire the exclusive right of land use, through direct negotiations (described below).

The lease of land is based on direct negotiations. 99% of the total lease agreements concluded over the last two years have been the result of direct negotiation at a nominal price or, on average, only 2% higher than the normative land price. The analysis shows that if land were leased at market price, municipal budgets would have been supplemented with 14.35 million MDL every year.

Rent is not collected. Thus, as of 1 January 2016, according to the Court of Accounts[3], 72 lease agreements worth 3.8 million MDL (per year) were not registered. Meanwhile, accrued debts amounted to 16.54 million MDL, of which 8.85 million MDL were debts with an expired limitation period and for other 2.4 million MDL the courts issued judgements in favour of Chisinau municipality. The share of debt recovery is on average 60% of the total debt accrued in the previous year. The price paid for this inactivity of the municipal officials was 13.34 million MDL, with the imminent risk of losing 7.69 million MDL, while future losses are estimated at about 4.61 million MDL.

Land is not used for its purpose. The general scheme assumes that the economic agent takes a lease of land to use it for parking areas or terraces, after which, by decision of CMC, PMC and DGAUP, the economic agent is allowed to build residential buildings. At present, 28 ha are parking areas, and if only 1/3 of them are used in the future for the construction of residential buildings (an area of 9 ha was calculated according to their location in the immediate vicinity of the recreation areas, green areas – popular for construction of residential buildings), the risk of future losses can be estimated as the removal of these areas from public circuit, with a minimum value of 13.6 million MDL, according to the normative price for land privatization.

Use of land lease as a precursor to land privatization. Land privatization takes place through public tenders or, in some cases provided by the law, based on the lease agreement. Since about 39 hectares of land are privatized every year, and all of those 54.16 ha available in 2015 were privatized, under a previous lease agreement, we can assume that the minimum losses recorded in this case amount to 4.3 million MDL or 10% of the total amount of privatization proceeds. However, the losses are much higher. For example, based on lease agreements, 0.86 hectares were privatized in the centre of the city in 2016 at a normative price (1.25 million MDL), while the market price of the land in this area is 820 euro per square metre. The losses in this specific case are 14.7 million MDL.

Lowering the privatization price of the near-house land. The near-house land, the land adjacent to the near-house land, necessary for carrying out the economic/industrial activity and all land leased for commercial, industrial and other types of activity can be privatized at the normative price. Thus, out of 7,947 hectares of near-house land, it was decided to privatize 5 ha 5 at a price of 7.3 million MDL, by using a tariff of 13897.44 MDL per point-hectare, instead of 19873.34 MDL per point-hectare as stipulated in the law. The damage caused only in this case is 3.1 million MDL. The risk is even higher, as it is not very clear what are the norms for calculating the near-house land and what is its area, while the privatization requests are based on individual calculations, depending on its characteristics. Moreover, it is allowed to privatize the land near the incomplete constructions or highly degraded constructions (3 ha in 2015-2016). As a result, the damage to the municipal budget was 7.1 million MDL.

Unjustified scheduling of payments. Payments in the amount of 4.4 million MDL for land privatization were scheduled in 2 separate (identified) cases without any reason for a period of up to 3 years. Moreover, the scheduled payment was not adjusted to the inflation rate (a loss of 0.82 million MDL), and in the sale-purchase contracts penalties were set in the amount of 0.22 million MDL for late payments, which were not paid. Thus, under the legal framework, the sale and purchase of the public land used in the technological process near the private facilities, as well as land near the incomplete constructions, is done at the normative price of the land, which is paid within one month. At the same time, the regulatory framework provides for the payment of the selling price as a single payment or in instalments, before the contract is signed, without any specific timeline. Against this background, the DGARF did not record the contracts, while buyers were offered an opportunity to pay in instalments set at their discretion. The loss in this case is 0.82 million MDL.

Loss of land as a result of court decisions. Poor representation of CMC’s interests in the courts

Over the last 5 years, 57 plots of land with an area of 239 hectares were lost, 219.11 ha were adjudicated in 2014-2018 by court decisions, which were sold at normative prices. The strategic analysis of the judicial practice relating to cases of contraventions of non-authorized constructions of the National Anticorruption Centre[6] reveals that out of the 150 judgments delivered between 2014 and 2018, only 48 were sued, and in the other 102 cases, the court delivered judgments to terminate the contravention proceedings. Due to the expiry of the limitation period, 58 cases were terminated, of which 18 due to the violation of the contravention procedure, 18 due to the failure of the investigating agent (police officer) to attend the trial and 8 contravention cases were terminated because the investigating agent did not submit sufficient evidence to prove the contravention. Out of the 48 cases in which the court ruled that the offender shall pay a fine and the unauthorized construction shall be the demolished, only 23 cases remained in force. Data provided by the Agency for Land Relations and Cadastre, based on court rulings, reveals that the estimated of land lost over the last six years through court rulings is over 300 million MDL.

Costs and risks of corruption are triggered by social norms, traditions, the existing legal framework and impunity. In the field of municipal land management, the relations between the beneficiary and the public authority take place in the so-called "grey" or "informal" area, where it is not very clear how the power is executed, where no corruption risks were identified, but rather informal prerequisites for corrupt practices. Thus, the lack of transparency of land management, the high degree of discretion offered to officials and courts by the existing legal framework, delays in decision-making processes in the Chisinau Municipal Council lead to the loss of municipal land. All of these amount to an average of over 130 million MDL per year. The fact that land rent serves as a precursor to privatization is just a scheme to purchase cheap land, to the detriment of public interest. Amendment of the current legal framework to prevent such possibilities would supplement the budget with at least 10 million MDL per year. Last but not least, it is unacceptable that courts allow the abuse of local public property, by generating losses of about 100 million MDL per year. This occurs either because of the lack of public authority's ability to defend its interests or because of informal and abusive arrangements of the courts.