Everything about Informal Economy. What are the corruption risks in enterprises founded by the Local Public Authority? 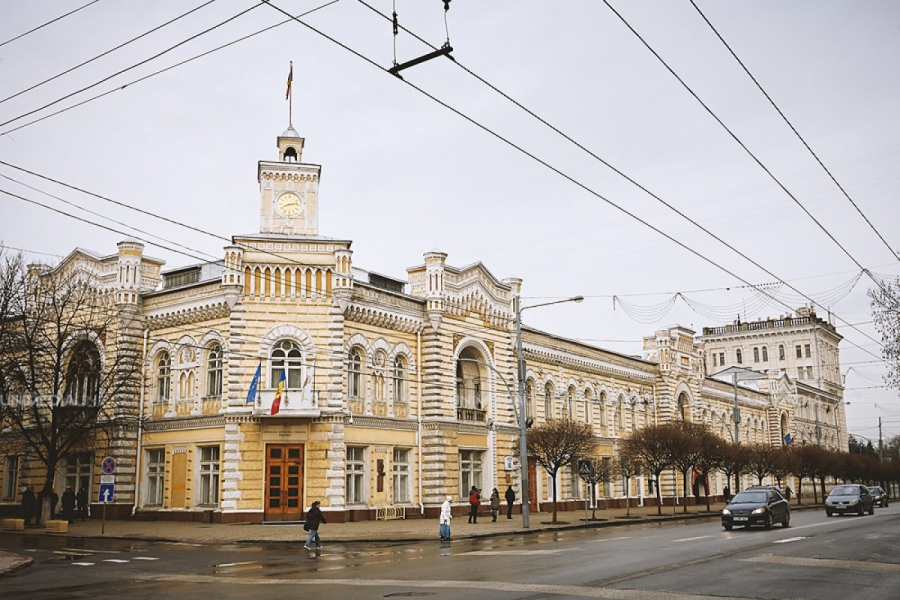 Municipal enterprises managers across the country considered at the beginning of 2018 that corruption is the least important problem in the entities they managed. In the last two years only the National Anticorruption Center registered 25 integrity related incidents committed by the municipal enterprises (MEs) decision makers on influence peddling, abuse of power or abuse of official position, excess of official authority and money laundering, of which 14 MEs were founded by the Chisinau Municipal Council (CMC). Other 7 serious cases of conflicts of interest have not been concluded yet. The lack of transparency on the enterprises’ activity, the ambiguous legal framework and the founders’ frantic lack of interest lead to potential annual losses exceeding the amount of MDL 500 million annually, as a result of corruption. The main areas with the highest risk of corruption and generating the biggest losses are relate to enterprises’ property management and procurement processes. Below is a brief description of the main corruption risks in municipal enterprises, including short recommendations.

How many enterprises were founded by the Local Public Authorities in Moldova?

According to the information provided by the Public Property Agency, there were 411 enterprises and companies operating in the Republic of Moldova on 1 January 2017, where the Local Public Authorities (LPAs) held the majority share and contributed with MDL 2,075.9 thousand to their social capital. Of these, 379 are municipal enterprises having all together a share capital of over MDL 1,291.2 thousand.  The other 32 are trading companies and the value of the LPAs’ owned share capital is MDL 784.7 thousand. The Chisinau Municipal Council is the founder of 63 municipal enterprises, with a total share capital of MDL 662.4 million, and of 10 joint stock companies, with a share capital of MDL 832.5 million, of which MDL 662.6 million represents the share of the Chisinau Municipal Council, ranging from 3.9% to 100%. According to the latest inventory reports, the value of the real estate under MEs management was over MDL 60 million (Table 1). 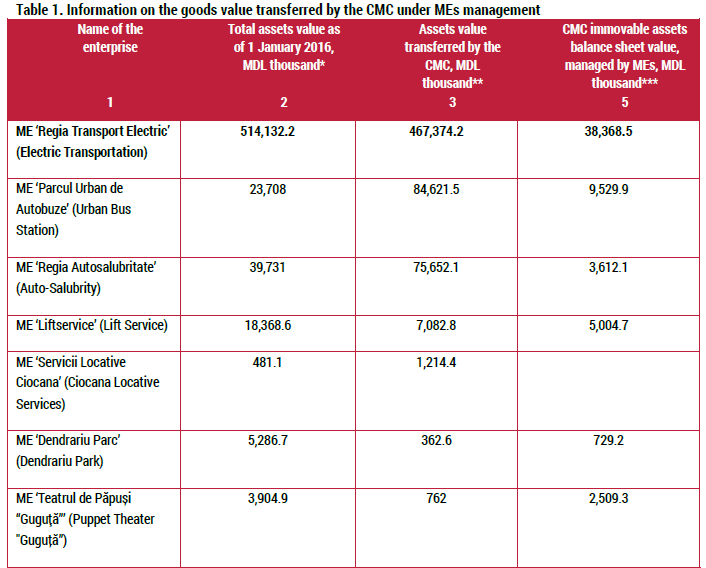 What are the identified corruption risks?

The most common corruption risks are related to the ineffective property management, fraud in the procurement processes, excess of official authority, the risk of influence peddling, the risk of taking/giving bribery, the risk of not declaring conflicts of interest, political clientelism.

The risk of assets misappropriation (property) is generated by the regulatory framework corruptibility that relates to MEs founding and activity, the defective decisions of MEs/JSC founders where LPAs hold share, ineffective control by the founders, lack of the internal control system implementation mechanisms within the private law entities. In 84.5% of the LPA founded enterprises there are no regulations on prohibiting private use of the enterprises’ assets, and for 59.4% of the LPA founded enterprises, the Board of Directors has not taken legal measures to ensure the integrity and efficient use of the enterprises’ assets. Thus, real estate worth MDL 300 million and land worth MDL 19 million were not registered by the entities in Chisinau on 1 January 2017. According to the Court of Accounts, these real estate and land are at risk of being alienated, provided they are rented out without a valid contract in place. The Court of Accounts reports attest that more than 10% of the property under MEs management is not registered, i.e. over MDL 3 billion of transferred assets may be alienated or used for personal benefits.

The risk of manipulating the procurement procedures is due to the deficient non/implementation of the regulatory framework in relation to the procurement of goods, works and services, the lack of ineffective control by the founders and the lack of sanctions for violation of departmental regulatory framework with reference to procurement. Taking into account that the total value of Chisinau MEs’ procurement in 2017 exceeded MDL 240 million and these acquisitions did not fall within the scope of the Law on Public Procurement, it is at least alarming that, according to the respondents, in 87% of cases not even working groups on procurement were created, and only 85% had an administrative document that established the framework for this processes.

The risk of enterprise decision makers’ excess/abuse of official authority is generated by lack of control or by ineffective external control by the founders, as well as the failure to sanction enterprise managers for confirmed violations. Only 3% of the enterprises created by the Chisinau Municipal Council have a Board of Directors.

The risk of deliberate manipulation of financial reports/the risk of forgery in accounting documents are caused by the regulatory framework deficient application with respect to the administrative-territorial unit property management, the assets periodic records keeping and inventory, deficiencies in the external control by the founder and in the internal control by the manager.

Typical corruption risks (the risk of influence peddling, the risk of taking/giving bribery, the risk of not declaring conflicts of interest, political clientelism) are generated by inadequate customer relationships, lack of professional integrity, maladministration of anti-corruption procedures. One of the solutions that could avoid the corruption risks listed above is observance of the conflict of interest legal regime. Enterprises’ managers are subject to the conflicts of interest declaration under the Law 133/2016 on the declaration of personal property and interests. However, 78% of managers did not approve a policy on identifying and addressing conflicts of interest within the enterprises, which leads to frequent cases of the conflict of interest regime breach. While managers declare this risk to be the easiest to remove, in fact there are multiple cases that either have not been solved before being submitted to the National Integrity Authority, or have remained unconfirmed by this authority.