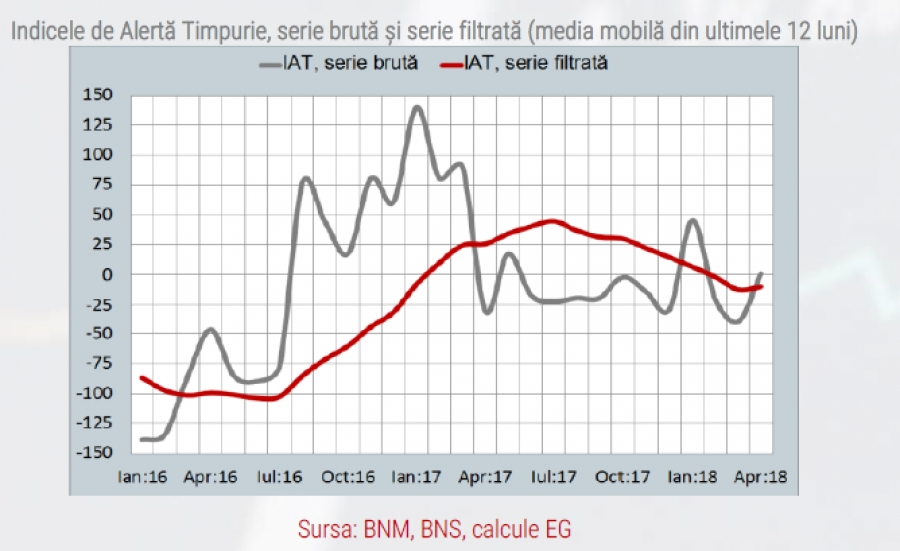 Economic dynamics remains positive, but many risks persist. The Early Warning Index (EWI), calculated quarterly by Expert-Grup, after a downward trend, in Q2:18 reached the resistance level and stabilized. EWI negative growth during Q2-Q4:17 signaled the possible slowdown in growth, which was reflected in the GDP evolution from the beginning of 2018: in Q1:18 compared to Q4:17 the GDP growth decreased from 6.4% to 3.7% y-o-y. EWI trajectory in Jan-Jul:18 points to the current year’s growth limits. Thus, the growth is likely to stabilize at arround 5% in 2018 and 4% in 2019.

Weather conditions and MDL strengthening will constrain the economic developments. In Jan-Aug:18 the amount of precipitation decreased by 19.3% y-o-y. This evolution was due to the declines in Apr:18 (-92.1% y-o-y), May:18 (-65.5% y-o-y) and Aug:18 (-54.5% y-o-y). The low volume of precipitation will have a negative effect on the vegetable and autumn crops, thus affecting the dynamics of the agricultural sector. Due to the strengthening of MDL, the purchasing power of remittances declined, and this fact negatively influences the consumption of the population, in particular of the households receiving remittances: in Jan-Jul:18 the real value of money transfers from abroad decreased by 3.6% y-o-y, despite a growth in USD terms.

Economic policies with electoral flavor create imminent risks for economic growth. In addition to major infrastructure projects (‘Good Roads for Moldova’ program or ‘Chisinau Arena’ complex), the Government launched other electoral initiatives: extending the ‘Prima Casa’ program for public officials and families with children and tax break by implementing the flat tax rate of 12% for individual income and the reduction of the state social insurance contribution paid by the employer from 23% to 18%. Both initiatives have important budgetary implications: the ‘Prima Casa’ program involves the allocation of budgetary resources to guarantee mortgages, while the tax break only in 2018-2019 implies costs of initiatives were promoted in a period when a large proportion of foreign financial assistance was about MDL 1.8 billion for the state social insurance budget and MDL 600 million for the state budget. These suspended and the budget deficit could exceed 3% of GDP. Therefore, after the elections we can expect measures that would offset these losses, including budget austerity, more severe fiscal controls and/or a rise in taxes, with adverse effects on the medium-term economic growth. In addition, to cover the budget deficit, the Government will most likely increase the issue of Government securities through which it will borrow from banks. As a result, the competition with the private sector for bank resources will be tightened, which will further undermine the private investment activity (phenomenon of crowding out of private investments).

Financed by the Swedish Goverment