How Is the Citizens’ Intention to Pay Taxes Measured?

Tax morality is ”the moral obligation to pay taxes” and represents „people’s conviction that they contribute to the development of the society by paying taxes”. In fact, a higher level of tax morality contributes to diminishing the shadow economy. A number of researchers have empirically demonstrated the negative correlation between the tax morality and non-observed economy. It is also presumed that the use of non-coercive measures aimed at enhancing tax morality would have significant effects on increasing tax compliance

How Does Corruption Affect Citizens’ Intention to Pay Taxes?

Manifestations of corruption in the Republic of Moldova, such as accepting bribes or undeserved privileges from the state, also diminish the level of tax morality. The application of quantitative methods allowed identifying the following variables which have an impact on tax morality: justification of undeserved privileges from the state, justification of accepting bribes, justification of the unofficial salary and informing the population about the use of public money. Obtaining state privileges and bribe-taking are manifestations of corruption, and receiving unofficial salaries has direct implications on corruption. Justification of unofficial salaries has the greatest influence on morality, while the changing attitude towards getting bribes, as well as the changing opinion about claiming unjust state privileges, have a lower impact. Changing the attitude towards receiving unofficial remuneration from a negative to a positive one will increase the probability of consolidating tax morality by 7.59%. 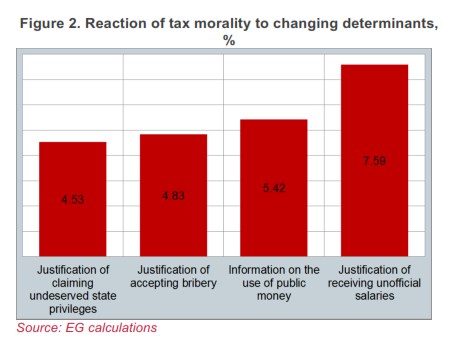