Everything about the financial system. Corruption Beyond the Public Sector

Corruption without limits: from public sector to the banking sector

With the aim of mobilizing available resources from depositors and orienting them towards investors, banks have a decisive role in supporting and developing the economic environment. In the absence of a developed capital market, Moldovan banks remain one of the most important sources of funding the national economy, providing funds both for private companies' businesses and individuals’ projects. The importance of this sector for the economy is revealed by the volume of loans granted - over MDL 32 billion at the end of 2017 or 20% of the country's GDP. Moreover, banks are also an important source of funding for Government, providing permanently about MDL 7 billion to cover the domestic Government debt. On the other hand, being practically the only financial instrument for savings, domestic banks keep about MDL 60 billion as savings from households and companies, by 20% more than the resources accumulated into the national public budget during one year.

The efficiency of mobilizing funds from those who save money to those who invest could be undermined by corruption and the obscure intentions of bankers who make this process running. Corruption can be encountered not only in public institutions, but also in private entities such as banks, which have a public character on grounds that they operate with money drawn from the population. Usually, corruption could occur during the lending activity in institutions with weak governance and inefficient risk management. Overvaluation of collateral, poor management of conflicts of interest, large volume of loans granted to related parties1 orto politically exposed persons, and participation in money laundering schemes are corruption-prone areas.

The size, severity and public character of recent bank frauds in Moldova, prove the existence of corruption with direct consequences on consumers and taxpayers. As stated in the Kroll investigation reports, massive frauds were committed mainly due to the conscious violation of the lending rules and the ethical and integrity principles by bank managers. Second, corruption expanded the scope of fraud to an unprecedented level even at the international level, generating risks to national and economic security of the country. Thus, the 2014/2015 banking crisis affected each of us,remaining a black spot for the domestic banking sector and political elite of those times.

Corruption and fraud in banks - a barrier to economic development

As proven by the 2014/2015 banking crisis, the losses generated by fraud and corruption are a significant impediment to reaching the objectives of economic growth and sustainable development. The failure of many banks to follow the ethical and integrity standards led to extensive non-performing loans and money laundering. At the same time, the obscure interests of managers and shareholders facilitated the fraudulent embezzlement of financial resources through the lending activity, leading to the bankruptcy and liquidation of three banks.

Although all local banks operate in the same economic environment, they have different results and performances. Being the core activity of banks, any shortfalls in the lending process impact the efficiency of the whole activity, while affecting the reputation and soundness of the institution. 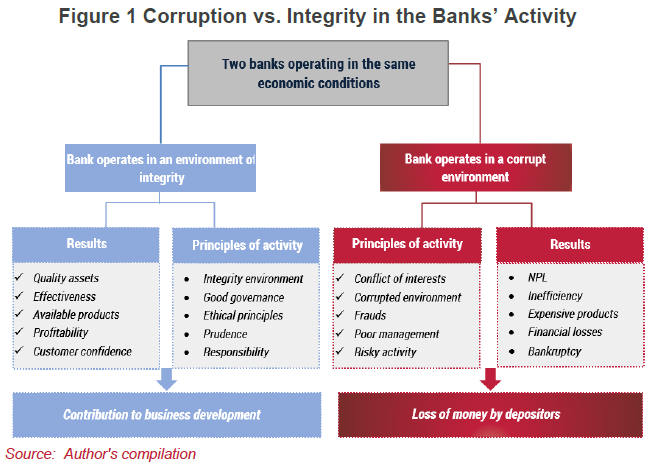