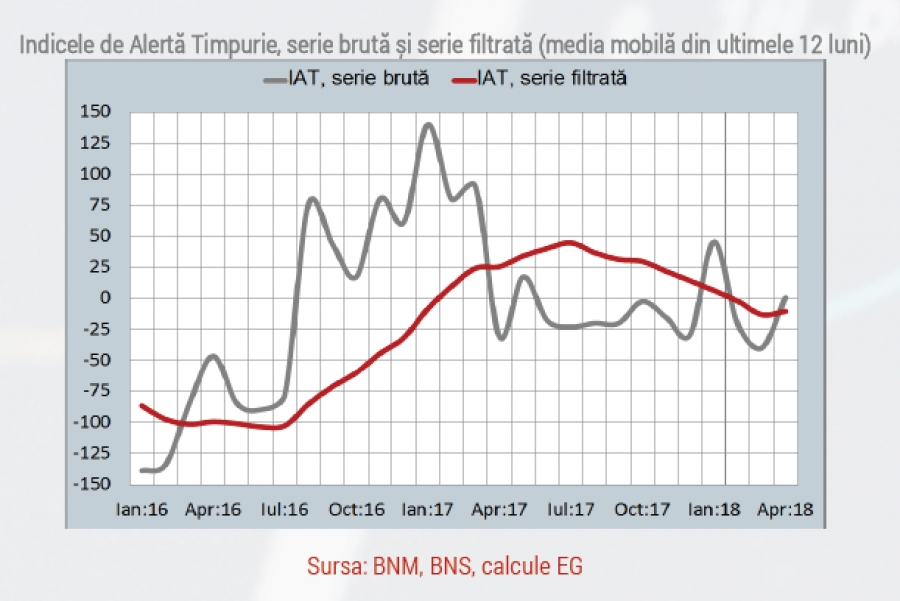 Despite the positive economic dynamics, the trends that could endanger the economic growth are getting stronger. The Early Warning Index (EWI), calculated quarterly by Expert-Grup, posted a downward trend and remained below 0 in Apr:18. This reveals preconditions for a slower economic growth in the near future, which corroborated the Expert-Grup forecast of economic growth. While we expect a GDP growth of 3.8% (pessimistic scenario) or 5.6% (optimistic scenario) for 2018, the growth rates will slowdown in the second half of the year. The EWI components that pulled the indicator down were the remittances and exports expressed in MDL and adjusted for inflation. The negative change in remittances and exports is determined by the strengthened position of MDL on the foreign exchange market.

The economic dynamics is supported by public investments, while the MDL appreciation limits the growth prospects. Namely, as a result of the strengthening of MDL, the purchasing power of remittances declined. In Jan-Apr:18 the real value of money transfers decreased by 5.6% y-o-y. At the same time, the strengthening of MDL had a negative impact on the exporters' revenues. Thus, in Feb-Apr:18 the real value of exports decreased by -1.4% y-o-y.

The main factors that risk to undermine the economic growth until the end of the year can be grouped into three categories: (i) structural; (ii) electoral; and (iii) weather-related. The structural factors are related to competitiveness shortfalls, manifested by increasing trade deficit (especially in the context of national currency appreciation), low productivity and growth at a rate below real wage growth. The electoral factors are related to the reluctance of private companies to invest, which results in stagnation of private investment and decreasing stock of bank loans. In addition, a series of initiatives with electoral flavor have been already launched (e.g. ‘Good Roads for Moldova’ program or ‘Chisinau Arena’ complex), but which lack clear budget coverage and risk to affect the public finance stability. These risks are fueled by the proximity of the Parliamentary elections, scheduled for this autumn, when the public policies could be anchored predominantly in electoral interests to the detriment of reforms that target at sustainable economic growth (even if such electoral actions can have beneficial economic effects in the short run, after the elections they need to be offset against medium- and long-term economic growth). An example is the increasing budget deficit, which could reach 3% of GDP in 2018, which will have to be offset in the coming years. The third set of constraints for economic growth is related to the weather conditions of this year. In particular, the insufficient rainfall could damage a number of agricultural crops, which could impact negatively the income of both farmers and the agricultural processing industry, with low-income rural households and small farmers being affected the most.