MEGA, XVIIth edition: Conclusions of the economic year 2017 and forecasts for 2018 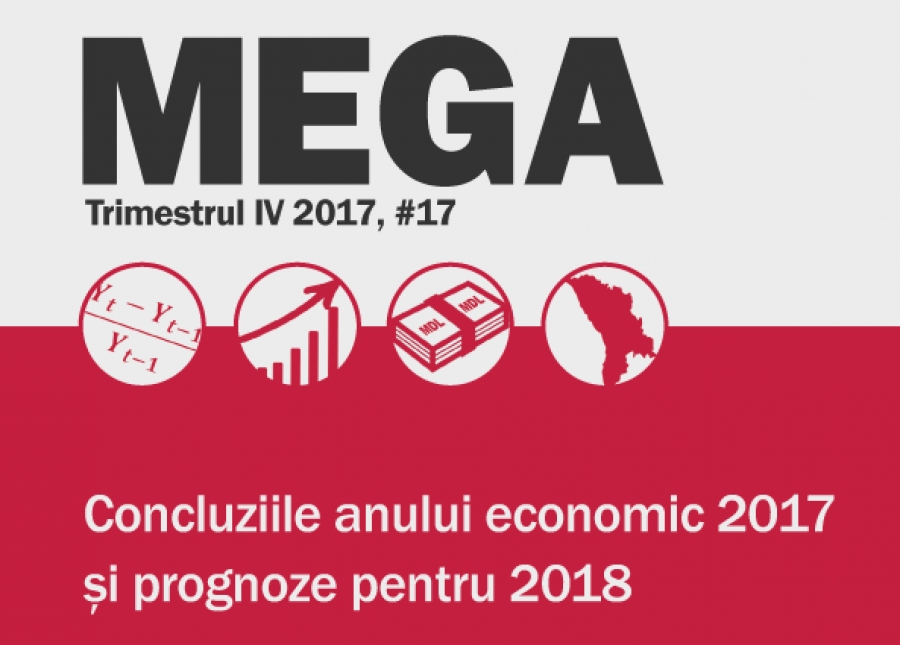 The economic year of 2017 fell short of expectations: Gross Domestic Product felt under the pessimistic scenario of our forecast made early in the year (3.0% – 4.0%). The initial GDP growth forecast of 6%  did not materialize due to unfavorable weather this spring that undermined the harvest; high uncertainty among businesses who were reluctant to resume the crediting, private investments and industrial activity; and the slow pace of reforms: about half of the actions stated in the Roadmap as priority reforms of the Government and Parliament were not implemented . On this background, the economic growth of 2017 was based on a slight revival in consumption as a result of increased remittances after two years of decline, and higher public investments after the external funding was unblocked. If the influence of these two factors is excluded, as by definition they are temporary due to the low basis of comparison, the economy could be in recession this year. Hence, in 2017 the economic growth was both slow, less than expected, and not sustainable, which generates many concerns for 2018.

For 2018, we forecast an economic growth of about 4.0% (3.1% according to the pessimistic scenario and 4.8% according to the optimistic scenario). It is based on the assumption that the agricultural year will be favourable, which will boost the agricultural produce and export capacities, the external budget support will continue to foster public investments, and the household consumption will grow. On the other hand, the GDP deviation will remain negative (the economy will continue to grow under its potential), at least due to two reasons. First, the uncertainty that is currently affecting the companies’ decisions to invest will remain at high levels, especially on the background of Parliamentary elections. This will hamper the growth of bank lending, due to both low demand from companies, and limited supply: banks will be cautious to assume risks, including in the context of Basel III implementation. Second, the competitiveness constraints will be maintained, which will affect the exports; and with the growing consumption, the net exports will have a negative impact on the economic growth.

The low competitiveness will remain the main problem of the Moldovan economy. During the past years, the competitiveness flaws have been hidden by increasing remittances, which used to support the domestic demand and secured an important inflow of foreign currency. But the remittances are becoming more and more volatile, and tend to shrink in the long run. This source of economic growth needs to be replaced with an increase in exports and investments. But Moldova is continuously losing the competition in the region for sales markets and foreign direct investments (FDI): the share of exports in GDP and levels of FDI per capita are the lowest compared to countries in Central and Eastern Europe. Moreover, Moldova is also losing the competition for its own labour force: the number of emigrants with higher education increased in 2017, revealing an erosion of human capital, which is the main source of the country’s long-term competitiveness. According to Global Competitiveness Report 2017-2018, Moldova ranked the 89th out of 137 countries, recording the poorest performances in areas of critical importance for such a small country with scarce resources: institutions, financial sector, sales market, innovations and business environment complexity. Moldova’s ranking improved by 11 positions compared to the previous edition of the report, but a more detailed analysis reveals that this increase is a cumulation of insignificant growths (within the margin of error) of several sub-indicators, without any substantial improvements in critical development areas. Without substantial reforms that would strengthen institutions and the rule of law, Moldova will keep on losing the competition for sales markets, investments and its own labour force, which will pose even bigger constraints for economic growth.

With the Parliamentary elections getting closer and in an attempt to mask the competitiveness flaws and slow pace of reforms, there is a risk of political pressures on the budgetary-fiscal and monetary policies. The pressures might target the budgetary and monetary expansion in order to boost the demand and investments via administrative interventions for electoral purposes (e.g. higher salaries, social benefits or public investments; or even a more relaxed monetary policy in order to boost lending activity). Under these circumstances, the Ministry of Finance and National Bank of Moldova (NBM) will have to resist these pressures, keeping a prudential stance of both budgetary-fiscal and monetary policies. In the first case, the budget planned for 2018, though it seems balanced, has a number of risks. The first relates to the high dependency on the foreign budget support: if external grants are excluded, the budget deficit is estimated at 4.7% of GDP - double the budgetary-fiscal rule of 2.5%. The second risk derives for the population ageing trends, which pose bigger pressures on the public finance system, calling for larger transfers to the State Social Insurance Budget. The third risk stems from the precarious economic situation at the local level that, in tandem with the limited capacities of local public authorities, undermines the local tax base, making LPAs to need more transfers from the central budget. Hence, any deviation from the budgetary prudential norms, especially under political pressures, could significantly destabilize the public finance system, constraining the economic growth. In this context, any budgetary amendment for electoral purposes needs to be avoided. As for the monetary policy, the eventual pressures on the NBM to excessively loosen the monetary policy and artificially foster the lending activity could augment inflationary risks, which will make loans even more expensive. In this context, the monetary policy needs to remain prudent and focused on mid-term inflation targeting. An eventual monetary loosening needs to be gradual and only if the inflation expectations stay anchored within the band targeted by NBM (5%, +/- 1.5 p.p).

The competitiveness of the Moldovan economy can be increased and, respectively, a qualitative economic growth can be achieved only by systemic reforms. The main reforms should focus on the following:

• Institutional framework that ensures strengthening the rule of law and fighting corruption. In essence, the institutions in charge of ensuring the rule of law and fighting corruption need to be more independent and more transparent, and their capacities needs to be strengthened significantly. In parallel, the recently initiated public administration reform needs to go deeper and improve the processes in public institutions, implement a more attractive policy of monetary and non-monetary merit-based remuneration, and improve the prestige of public officials. This will enhance the trust of businesses, which regard the corruption and operation of public institutions as the main barriers to their entrepreneurial work .

• These measures need to be accompanied by an improved business environment, focused on the needs of small and medium-sized enterprises, which are the most vulnerable. In particular, it is necessary to decrease the number of state controls and permits, thus diminishing the discretion of public officials in relation to business entities, and to increase the transparency of these processes.

• In the financial sector, it is critical to improve the corporate governance in both banking and non-banking financial institutions by enhancing their transparency and shareholding quality, implementing the fit-and-proper criteria, and attracting strategic investors. It is necessary to ensure the operation of inter-institutional framework of financial stability, focusing on the capacities to prevent financial crises. Last but not least, the investigations of the banking fraud, uncovered in 2014-2015, need to be more dynamic and more transparent, while the recent initiatives to “decriminalize” some economic crimes could hamper the investigations and should not be approved .

• In the budgetary-fiscal area, it is necessary to implement fully the electronic public procurement mechanism; develop a more detailed, clear and less discretionary Tax Code; strengthen the capacities of the Court of Accounts and develop a mechanism for the implementation of its recommendations; enhance the budgetary transparency of public institutions; and encourage a broader participation of the civil society in the budget process at both the central and local level. Last but not least, the state-owned enterprises need to be subject to a broad reform in order to increase their transparency and corporate governance.

• In the labour market and human capital area, more efforts are needed for the economic empowerment of young people, which will allow harnessing the demographic dividend (currently the age group of about 30 years old is the largest, and unless enough economic opportunities are offered, they will either leave or stay economically inactive, depriving the economy of a huge development potential). The following years are critical in this regard, because if the demographic dividend is missed, the current demographic transition will turn from an opportunity into a constraint.

• In the foreign trade area, it is necessary to boost reforms related to the implementation of the DCFTA commitments for the full exploitation of the benefits offered by this commercial regime. At the same time, it is imminent to make efforts to eliminate all tariff and non-tariff barriers for domestic exporters, while transparencing and modernizing the processes of issuing permissive documents.

In the following years, the quality and dynamics of economic growth will depend, more than ever, on the quality and dynamics of domestic reforms. The above-mentioned reforms will literally be the main basis for economic growth, in the context of high internal and external uncertainty. Moldova cannot rely anymore on conjunctural factors for a sustained economic growth: in the following years the remittances will follow a downward trend; the country’s investment attractiveness based on cheap labour force will dissipate as a result of migration, higher real salaries and drawbacks in the educational system; the external budgetary support from development partners will be subject to more conditionalities; and the competition on the regional markets will become more intense. In these circumstances, the only viable economic development strategy is based on reforms that need to be implemented, regardless of the electoral cycle or political color of the Government.