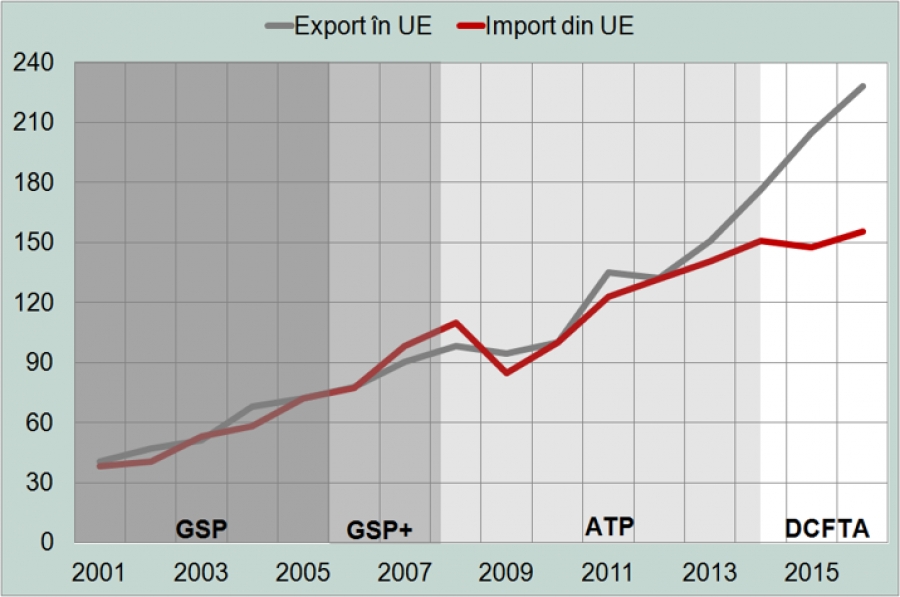 Expert-Grup presented ”Evolution of trade between Republic of Moldova and the European Union in the first few years of the Deep and Comprehensive Free Trade Areas Agreement” at the third session of the internal consultation working group on commerce and sustainable development between Republic of Moldova and the EU. According to the author of the study, Alexandru Fala ”In the first few years of activity of the Deep and Comprehensive Free Trade Area (DCFTA), trade between RM and the EU has showed a positive development. Although export prices have declined, the increase in the physical volume of exports has accelerated and consequently the value of deliveries to the EU has increased. On the other hand, imports have shown a negative evolution. This was influenced by a small increase in imports of goods by the EU and reduction of import prices. As a result, commercial relationships improved in 2016 compared to 2014 and the trade balance deficit with the EU has halved.

Meanwhile, liberalization of trade with the EU has not caused shocks for vulnerable sectors of the national economy, such as agriculture.

Moreover, the increase in the export of agro-food products has exceeded the import of these goods from the EU. At the same time, there is still no significant change in the structure of the national economy, although the implementation of DCFTA has favoured export and, implicitly, economic dynamics. Therefore, exports to the EU continue to be dominated by products coming from economic sectors, which rely on the extensive use of labour such as agriculture and toiling-based industries. Thus, although the functioning of the DCFTA is a prerequisite for the modernization of the country, ensuring the restructuring and economic development of the Republic of Moldova can be achieved only in the context of the genuine implementation of the reforms."