The Financial Monitor #5: An analysis of main reforms in the financial sector of Moldova, May - July 2017 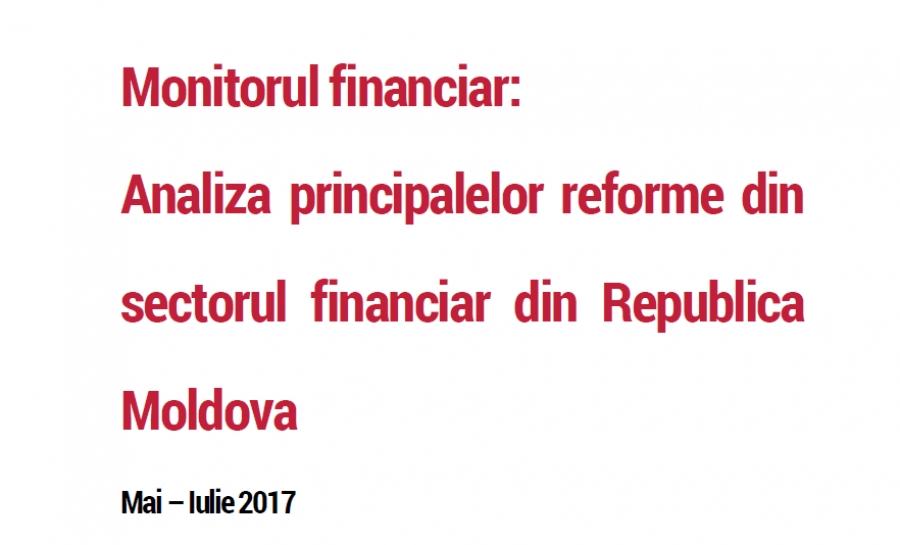 In spite of a certain progress in reforming the banking sector, the qualitative changes, especially concerning transparency and governance, fail to appear. In February 2016, Expert-Grup presented a plan for strengthening the banking sector , which focused on 7 directions of reform. Since the last analysis as of April 2017, we notice a relatively slow progress in their implementation. Up until the time being, out of a total of 35 recommendations formulated by Expert-Grup, 11 actions were implemented, 8 have not been implemented, 16 were implemented partially or are still in progress. However, after the approval of the new law on bank activity, an important number of recommendations will be considered implemented, although, obviously, their effective implementation will be a major challenge.

One of the important developments of the recent period refers to preparing the sector for taking on the Basel III requirements regarding the main prudential indicators. The new Law on bank activity that is to be voted in the Parliament in the final reading during the fall session, as well as the Regulation on bank activity administration framework, transpose the latest international standards and best practices in the process of bank authorization, regulation and supervision. Nevertheless, on some aspects, the national regulation exceeds the framework established by European legislation, granting prerogatives too broad to the NBM with respect to the banks. At the same time, there is no clarity as to how the systemic risks will be assessed, as well as how the systemically important entities will be determined. In the context of the banking crisis of 2014-2015, it is extremely important that these notions be defined as clearly as possible in order to avoid abuse and the eventuality of new government guarantees being issued without objective criteria to determine the adequacy of granting emergency credits.

Although the reform process aiming to align with the best international practices continues, special attention should be paid to the capacity of the banking sector to adapt to the new principles. In this sense, a wide assessment of the domestic banking sector and the individual capacities of each bank should be correlated with the implementation timeframe for the new provisions. The example of Central and East European countries in the process of the Basel III Agreement implementation shows an activation of mergers and acquisitions in the financial and banking environment, but the intensification of the effect of bank concentration around banks with unclear shareholder situation may be a risky element.

A series of recommendations formulated by Expert-Grup in February 2016 regarding the banking system reform still remain valid to this day, and their lack of implementation leaves the system vulnerable to many risks. The main deficiencies are related to the weak regulation of requirements for government guaranteed credits issued by the NBM for banks in difficulty, especially in the context of the terms of systemic risk and systemically important entity being introduced in the new Law on bank activity. Another major problem is the delay in reforming the National Committee for Financial Stability. According to the Law on bank recovery and resolution , the operation framework for the macro-prudential authority was to be finalized in April 2017. The delay of this reform leaves the financial system open to a significant level of risk, since the cooperation of authorities with supervision functions in the financial system is insufficient. Not lastly, the shareholder situation and transparency of certain local banks, the continuing offshorization of the banking sector, as well as the lack on investors in the share packages for sale remain to be major problems. The low level of corporate governance seems to be the reason the special regime for three banks is still maintained (Moldova-Agroindbank, Moldincobank, Victoriabank). The excessive prolongation of this situation inevitably renders the future of the banking sector uncertain.

See the press-release: The law on bank activity - an important but insufficient step in overcoming the deficiencies of the banking sector.

This document is published by Expert Grup and Expert Forum with the financial support of the Netherlands Embassy in Bucharest. The opinions expressed in this document Opiniile are solely those of the authors and do not necessarily represent those of the donor.
Authors:
Tags: