MEGA, XVIth Edition: Mysteries of economic growth after the storm 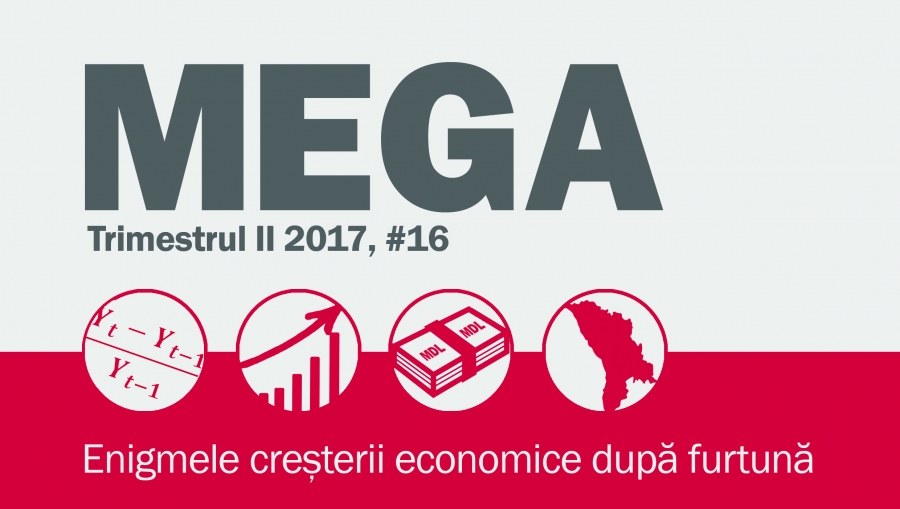 The economic growth of 2016 was higher than forecasted, but lower than the optimal level. The Gross Domestic Product of the Republic of Moldova increased by 4.1% in 2016, exceeding the forecasts from the previous MEGA publication (3.4% according to the baseline scenario). This evolution was determined by the higher-than-expected increase in consumption and exports of goods and services, which grew quicker than imports. These developments led to higher-than-expected increases in services and industry. At the same time, the slumps in investment activity and constructions were milder then expected. Also, the recovery of agriculture after the 2015 drought gave impetus for the economic growth in 2016. However, the GDP growth of 4.1% is much lower than the optimal level (~7%), especially given the low comparison base (in 2015 the GDP decreased by 0.5%). Moreover, this level was not much higher than in other countries from Central and Eastern Europe that have a GDP per capita several times bigger than Moldova: Romania grew quicker (+4.8%) with a GDP per capita of almost 5 times higher, Bulgaria grew by 3.4% with a GDP per capita 4 times higher, and Slovakia - by 3.3% with a GDP per capita 9 times higher.

Our GDP growth forecast for 2017 is 6% according to the baseline scenario and arround 4% according to the pessimistic scenario. Though at the first glance this forecast seems to be counterintuitive and higher than the forecasts made by the Government, IMF and World Bank, it is justified by three growth factors that were inhibited in 2015-2016 and will be unleashed in 2017:

• Revival of lending. The volume of new loans is expected to grow by about 15-16% in 2017, after banks had accumulated significant liquidities during the last two years, which were translated into lower interest rates on deposits and loans. This will foster consumption, as well as investments.
• Growth of remittances by about 5% in 2017, which will also contribute to consumption growth at higher rates than in 2016.
• Resumption of funding for public investments will foster the fixed capital formation due to the investment projects that were blocked in 2015-2016. The IMF Memorandum is the catalyst factor in this regard that helped relaunch the dialogue with other development partners of the country.

The economic growth remains rather unsustainable in the long-run. The aforementioned factors that will boost the economy in 2017 are short-term factors: revival of lending and remittances will happen after two years of decline, while the public investments will growth on the account of the projects that were postponed in the past. In addition, the economic growth model will remain consumption-based and will be accompanied by a worsening balance of payments, which in 2017 could exceed 5% of GDP.

The increasing current account deficit, on the background of a high short-term foreign debt and lack of access to foreign capital markets are the main sources of macrofinancial vulnerabilities for the following years. Signing of IMF Memorandum is helpful in this regard, as besides the reforms-based conditionalities, it also helps supplement the level of official reserve assets. As present, despite the fact that the official reserve assets exceed 5 consecutive months of imports, they do not cover fully the short-term foreign debt. For a state with an open economy, without access to foreign capital markets, with a relatively high current account deficit and foreign debt of almost the same level as the annual GDP, the current level of international reserves is not enough to ensure confortable imunity against external shocks.

The low competitiveness is a fundamental drawback that has affected the economic growth in Moldova during the past years. Traditionally, in Moldova wages grow at a higher pace than labour productivity: a trend that most probably will be maintained in 2017, as well. This puts major pressures on the private sector and generates strong stimuli for informal employment, especially in the agricultural sector, which accounts for about one third of total employment.

The labour market trends reflect the unsustainable and non-qualitative nature of economic growth. Though the quantitative indicators of labour market (higher employment rate) improved in 2016, the informal employment increased on account of the formal one. Thus, the increase in employment was accompanied by a decrease in the number of formal jobs. This trend will most probably persist, with severe consequences for the productivity and wage growth rate. As a result, the forecasted economic growth will not translate into a similar growth of people’s wellbeing.

Policy recommendations: Theory of change for the Moldovan Economy

The entire set of economic policies should target at enhancing the labour productivity and competitiveness of the Moldovan economy. These are the main underpinning pillars for the growth of wages, formal employment, people’s welfare, financial sustainability of businesses and revenue to the national public budget. Investments are the main trigger for higher competitiveness and productivity. Hence, the Government policies should give top priority to facilitating investments in the economic and human capital. This will augment exports, bring into equilibrium the trade balance and current account, increase the level of international reserves, decrease pressures on the national currency, increase people’s welfare and enhance the country’s resilience to external shocks.

In order to increase the investments in fixed capital it is crucial to improve the institutional framework and business environment. According to the Global Competitiveness Report 2016-2017, the following are the top-3 obstacles to businesses: corruption, policy and Government instability and inefficient bureaucracy. These results suggest that the Government needs to strengthen the rule of law in order to fight corruption more efficiently, and to implement the Public Administration Reform Strategy and the Regulatory Reform Strategy in order to strengthen the institutions and cut bureaucracy. It is also important for the accomplishment of these objectives that the civil society and development partners ensure permanent and rigurous monitoring in order to enhance the decision makers’ accountability in these areas.

Read the press release: Expert-Grup: in 2017 the Moldovan economy will grow by 6%, but the growth factors are temporary.