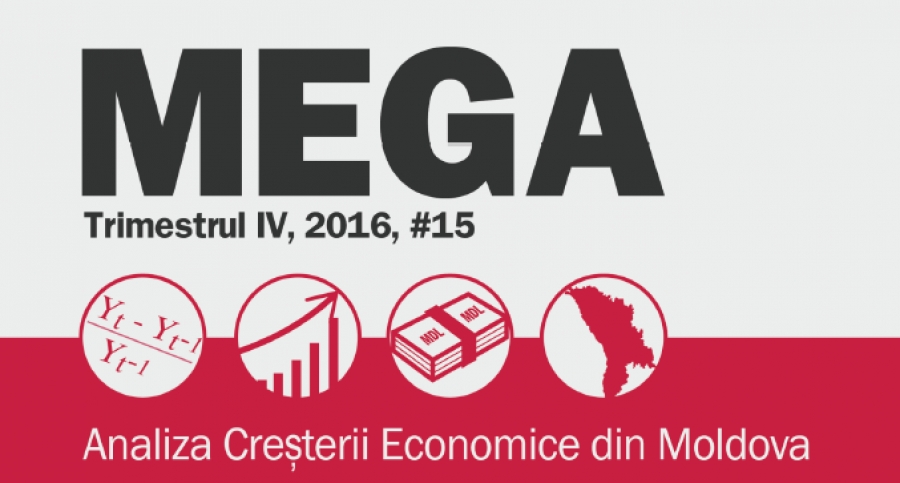 • Although the 2016 economic year was more favorable compared to 2015, it confirmed that the main problem of the Moldovan economy remaines its poor competitiveness. After the recession of 2015 (-0,5%), the Gross Domestic Product registers a marginal recovery in 2016 with a growth estimated at 3%. However, it was dictated by two sectors where growth is, most likely, unsustainable: (i) agriculture; and (ii) services. Agriculture registers a compensating increase after the 2015 drought; but the effect of a low comparison base will dissipate in 2017 and on the background of low investments, the growth cannot be sustained. The services sector recovered thanks to a modest increase of final consumption, which, in turn, was boosted by an increase in wages; this advance, however, happened on the background of declining labour productivity and investments in fixed capital.

• The competitiveness issues were also revealed by the fact that in 2016 the final consumption made a comeback as main economic growth driver, which lead to an increase in imports, while exports in real terms have decreased. Thus, as we had anticipated in the previous MEGA issue, the main source that softened the economic shocks in 2015 – the net exports – dissipated in 2016. Moreover, it had a major negative effect on the GDP due to an increasing discrepancy between exports and imports in 2016. For 2017 an increased level of uncertainty regarding macroeconomic developments remains, since the sources that propelled the economy in 2016 are not sustainable. Still, we admit a certain revival of the industrial sector, which will lead to a marginal boost of exports, as well as a modest growth of investment activity on the background of the effects of monetary policy relaxation, but also political stabilization (the post-electoral effect). Thus, we anticipate a GDP growth of 4-5%, admitting there will be no more weather, economic, political or other types of shocks.

• In spite of the economic recovery from 2016-2017, we emphasize the degradation of its quality. Besides the competitiveness and sustainability deficiencies mentioned above, the quality of economic growth is affected by at least three factors. First, the work productivity keeps falling, and paralleled with the real wages increase it undermines the producers’ capacity to compete on the domestic and external market. Second, a significant part of the consumption growth, which was the main economic growth driver, is happening on the account of consumption of in nature goods and services. This was due to the agriculture revival and, accordingly, it happened mainly in low income rural households. Third, the fixed capital investments kept falling during 2016, and for 2017 we do not expect a substantial boost in investment activities. The factors we mentioned reveal a lack of sustainability and inclusion of economic growth from 2016-2017. They will hold the economic progress back over the following years (for the following approximately five years we anticipate an economic growth around 3-4% (+/-1 p.p.), although a twice as rapid economic growth is necessary in order to ensure timely convergence with Central and Eastern European countries).

• The quality and sustainability problems of economic growth are revealed by the labor market tendencies as well, where the totat employment rate increased on the account of informal employment, while the formal one has declined. At the same time, in spite of the shrinking employment rate in 2016, we observe certain negative tendencies in the structure of official unemployment registered. Thus, the share of unemployed persons that were fired from their previous job increased. This could be a proxy indicator for entrepreneurial activity, meaning the comapanies either scale down their economic activities, or they try to make their businesses more efficient.

• The main immediate challenge is related to the risk of misleading economic policy decision makers about the economic tendencies, which look relatively good on surface, but contain many subtleties. As we mentioned above, in spite of the increased economic, consumption and employment, a more thorough analysis of statistical data reveals an increase of trade imbalances, reduction of formal employment, decreasing work productivity, falling investments and increased consumption from informal sources, which undermine the sustainability of economic growth. Consequently, the decision makers should treat the key macroeconomic indicators with maximum caution. This is mainly related to the budgetary, fiscal and monetary policies, which should be stimulating, rather than restrictive (in the spirit of promoting countercyclical policies). Thus, in spite of the positive economic growth in 2017 raising the fiscal burden should not be an option of fiscal policy. At the same time the NBM should be more consistent and bold about easing its monetary policy stance, as the demand-side inflationary pressures remain weak. Also, the Government should be very cautious in promoting budgetary austerity (the lowered budget expenditures should not affect health and education, which have not only substantial shares in GDP, but also influence the quality of human capital.

• The main medium term challenge is related to the low level of labour productivity. The discrepancy between real wages and labour productivity, which could be obserbed over the past years, became lately even more pronounced (even on the background of emigrating working age population and constant decline in employment rates). Therefore, the competitiveness of Moldovan economy is undermined by both by the price and quality of labor. This affects the country’s capacity to fully capitalize on the potential the EU DCFTA brings, it fuels the balance of payments imbalances, puts constant pressure on the level of the NBM currency reserves, and therefore, on the national currency, generates macroeconomic volatility and exposure to external shocks. Even worse is that, in turn, it erodes the country attractiveness for investments, which affects work productivity even more. Moldova was always caught up in this vicious circle, but it became more and more dangerous in recent years on the background of several governance failures (political instability and the banking frauds) that compromised the country attractiveness for investments. This will leave a mark on labour productivity and competitiveness over the next few years.

• The main long-term challenge is related to the balance of payments deficit. The discrepancy between financial flows leaving Moldova (e.g. imports) and those entering the country (e.g. exports, remittances) are to increase over the next years oscillating around 4-5% of the GDP. Although this level is comparable to other CIS countries, the deficit is quite high in comparison with Central and East-European countries. Moreover, the issue of current account deficit is aggravated by the high level of external debt (which is practically equal to the GDP), as well as by the modest inflows of direct foreign investments (Moldova is traditionally ranking lowest in Europe on FDI per capita). The foundation for these imbalances is low competitiveness (the trade balance deficit is the main cause of the current account deficit), and the risks refer to the macroeconomic stability (especially the national currency).

• The solutions for medium and long-term are in the hands of the Government. In order to balance the current account deficit, exports need to be stimulated. In order to increase exports, competitiveness need to be increased. In order to increase competitiveness, work productivity needs to be increased – an achievable objective only with boosting investment activity. According to the Global Competitiveness Report 2016-2017, the top three barriers for investors are: (i) corruption; (ii) policy instability; and (iii) political instability. Unlike other barriers which require many resources and time in order to be fixed (e.g. access to financing, infrastructure, quality of labor), in order to remove the existing top-barriers a firm and consolidated political will is necessary. In this sense, the authorities should speed up (and some places to unblock) the justice reform and implement an effective public administration reform (all solutions concerning these are issues are included in the recently approved relevant Strategies). Developing a public service which is transparent, professional and focused on the interests of the population and companies, supported by an incorruptible justice system. These are the main factors that would boost investments in Moldova, with the necessary effects on work productivity, country competitiveness and sustainability of the economic growth model.

This document is published by the Independent Think-Tank EXPERT-GRUP with the financial support of the Global Partnership for Social Accountability, World Bank. Opinions expressed in this document belong to the authors and are not necessarily the opinions of GPSA or the World Bank.