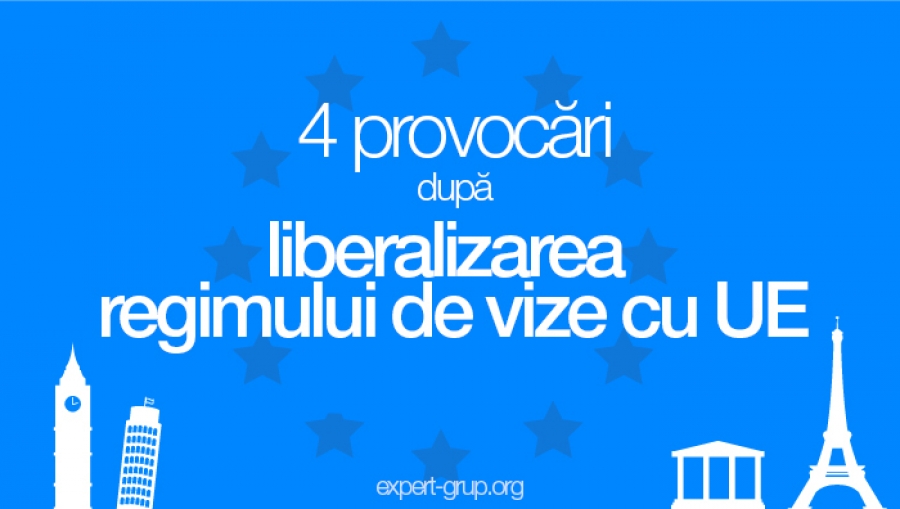 The liberalization process of the visa regime reached its final point and as of April 28th 2014, Moldovan citizens can travel without visas in 30 Schengen countries. It is indeed, a historic event for Moldova, as being the first country within the Eastern Partnership to enjoy a visa-free regime. At the same time, However, there is some uncertainty across the “post-liberalization” period .The described challenges should be viewed as hypotheses derived from the country peculiarities and public opinions, but also from the experience of the Western Balkan countries[1]:

Conclusion: The visa-free travel regime does not provide opportunities of employment in European Union. Any attempts to circumvent the rules will involve major costs related to Moldova’s credibility within the EU authorities. If "tourism with working purposes" will become a phenomenon, the reintroduction of visas for Moldovans would become inevitable. Additional pressure on the visa-free regime with the EU may result from losing the access to the labor market of the Russian Federation and the reorientation of migration flows.

Conclusion:  In the short and medium term, it is possible that those rules previously applied by EU Embassies and Common Visa Center[5] for obtaining the Schengen visa to be used extensively when exiting the country. In other words, Moldovan authorities should ensure that Moldovans do not break the rules of the visa-free regime.

Conclusion: The "Balkan scenario" is still unlikely for Moldova. Nevertheless, there are a number of circumstances (situation in Transnistria, respecting the minority rights) that can lead to a foreshadowing of similar problems.

Conclusion: There are a number of constraints that create favorable conditions for forging the Moldavian passports, which is a challenge to the visa liberalization. Although authorities are strengthening the documents’ security measures, continued efforts are needed to counter corruption.

Finally, without diminishing the importance and benefits of eliminating the EU visa regime for Moldovan citizens, the next priority will relate to ensuring the sustainability of these facilities. This will crucially depend on the implementation of our country’s commitments to the European partners (on migration management, securing documents, public order and security, as well as on human rights etc.). Therefore, the "post-liberalization" phase may be considered more important. Or this requires both effective implementation of actions initiated in the preparation stage ("pre-liberalization") and also finding efficient solutions to overcome the threats described above.

This material has been developed by the Independent Think Tank EXPERT-GRUP with the support of the “Open Society” Foundation, within the 2013/2014 Institutional Support project. Authors are solely responsible for the views and opinions expressed in this document, which may not be necessarily shared by the donors.