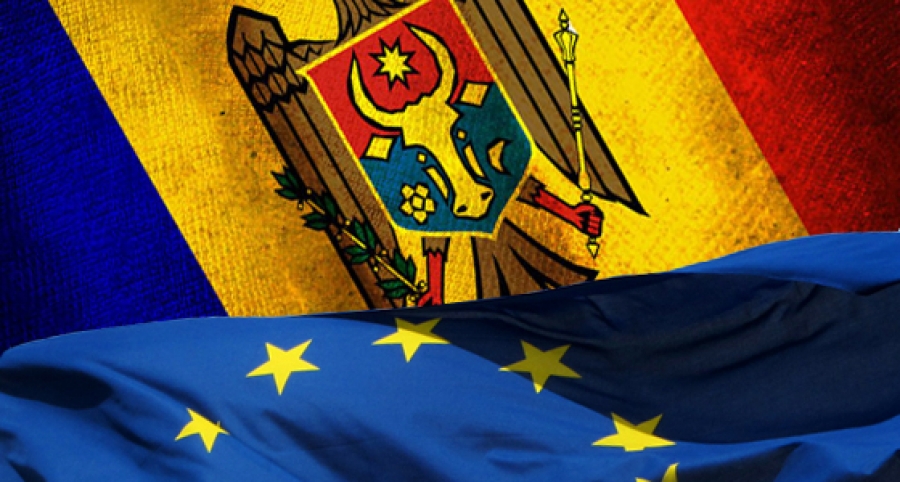 This week, on Tuesday 7 February President Igor Dodon of Moldova is expected in Brussels for his first meeting with the European Union since he was elected in November 2016.

His political agenda is overtly ‘pro-Russian’, and against the Association Agreement with the EU that is since July 2016 fully in force. This agreement contains a Deep and Comprehensive Free Trade Area (DCFTA) which gives Moldova full access to the EU market for virtually all products, while Moldova can take up to 10 years to reciprocate with eliminating its tariffs on imports for the EU.

President Dodon made his first foreign visit to Moscow on 16-17 January, holding talks with President Putin and other leading Russian officials. At his press conference with President Putin, Dodon said that the Association Agreement “has done Moldova no good”, that he would back its repeal, and to initiate active cooperation with the Eurasian Economic Union instead.

Regarding cooperation with the Eurasian Economic Union, it is very important. Mr Putin has spoken about this. In the morning I had a meeting with the leadership of the Eurasian Economic Commission. Today I put forward an initiative to sign a framework memorandum on cooperation with the EAEU. We agreed to begin consultations within the next few weeks and sign this memorandum in the next few months. It is not at odds with the agreements that Moldova has signed at this point with other partners, but it is the first step toward rapprochement.[1]

I asked Mr Putin to consider the possibility of Moldova getting observer status in the Eurasian Economic Commission. I believe this is a good step for us to see what needs to be done and how, as well as to gather information from both sides”.

For the time being Dodon does not have the power to do this, since his constitutional competences as president are weak, and the parliamentary majority and government are dominated by parties with pro-European agenda that do not agree with him. However there will be parliamentary elections not later than in 2018, and Dodon eyes getting then a parliamentary majority, and so to be able to go ahead with his objectives.

For his visit to Brussels it is first of all pertinent to get the facts straight. Over the last decade Moldova’s trade structure has massively changed in the direction of the EU and away from Russia. The primary facts are as follows (see also Figure 1)[2,3]: 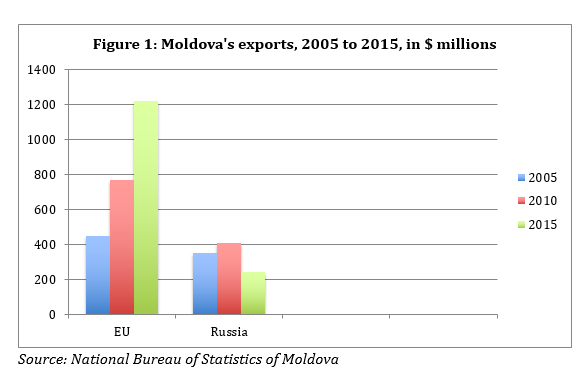 Also in the shorter-run alongside the negotiation, signing and entry into force of the Association Agreement with the EU, the story is the same:

Even if Russia ended its sanctions against Moldovan exports, and these returned from $241 in 2015 to their 2010 level of $404 million, they still would not amount to more than one third of the Moldova’s current level of exports to the EU (Figure 1).

A similar and indeed spectacular picture emerge for the Transnistrian region, which has also increased the share of its exports going to the EU from 20% in 2005 to around 66% in 2015-16[4], while the exports to Russia fell drastically from 40% in 2005 to 8% in 2015-16 . This shows that even the Russia-controlled breakaway region has had to move radically towards the EU market, which President Dodon fully ignored during his visit to Moscow.

The reasons for this are clear. The EU was already liberalising imports from Moldova already for some years since 2006 (with the General System of Preferences - GSP, GSP+), and more actively after 2008 (Autonomous Trade Preferences), before signing the Association Agreement. Meanwhile Russia chose to do the opposite and to sanction imports from Moldova with politically manipulated technical standards, especially health standards for agricultural product (both of vegetal and animal origins).

Moscow’s political choice was that Moldova should be severely punished because it was cooperating more closely with the EU. In particular in September 2013 Russia banned the import of Moldovan wines, in July 2014 it banned the import of fresh fruit and vegetable, and in August 2014 introduced import duties on 19 categories of products (contrary to the obligations under the CIS free trade agreement which both countries ratified [5]).

It is absolutely contrary to WTO rules to manipulate scientifically objective technical standards for political purposes, but Russia does not take WTO rules seriously when they run counter to its geo-political wish to bully and punish small neighbours for insubordinate (i.e. independent) behaviour. Russia has applied the same methods, in parallel, to Ukraine and Georgia.

Moscow has since 2015 begun to reopen its market partially for some specific Moldovan goods (vegetables and fruits, wines etc.), but to a limited number of companies, the majority of them originating from the pro-Russian Autonomous region of Gagauzia and Transnistrian separatist region. Russia has thus been using its ‘carrot and stick’ approach to heighten tensions and divisions between pro-European central authorities of Moldova and the Gaugazian autonomy.

Moldova’s new economic inter-dependence with the European market, and decline of Russia is of huge proportions. Moldova is now five times more dependent on the EU market than that of Russia, with the following shares (see also Figure 2)[6,7]. 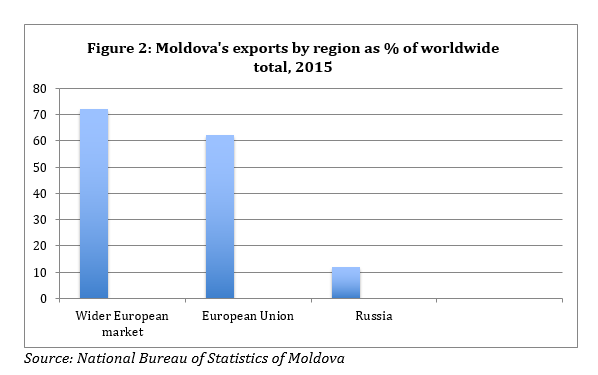 Moldova is currently extending its network of free trade agreements with countries of the ‘wider European market’, consisting of all the EUs’ close neighbours that have free trade agreements with it. This includes, beyond the EU itself the member states of EFTA, (Norway and others), CEFTA (the non-EU Balkan states), the EU customs union (Turkey), the EU’s south Mediterranean partners, and Moldova’s other DCFTA partners (Ukraine, Georgia). Moldova is both free and encouraged to build up this network of free trade areas. In total this wider European markets accounts for 72% of Moldova’s total exports. However this would be excluded by acceding to the Eurasian Economic Union that President Dodon proposes.

The EU has been supplying substantial macroeconomic loan assistance to Moldova alongside the IMF, substantial grant assistance, while the European Investment Bank and European Bank for Reconstruction and Development have become the biggest source of foreign investment.

When considering getting closer or even into the Eurasian Economic Union, president Dodon should further reflect on the experience of Armenia, since he is in effect wanting to do a retarded replay of the Armenian scenario of 2013. Armenia had like Moldova, Georgia and Ukraine negotiated an Association Agreement and DCFTA with the EU, that was due to be signed in November 2013 at an EU summit in Vilnius. Russia was opposed to this, and summoned the Armenian President to Moscow two months earlier in September for a totally non-transparent meeting, except that Armenia accepted Russia’s pressure to renege on signing with the EU and to join the Eurasian Economic Union. The quid pro quo of this volte face has never been revealed, but is widely supposed to have been based on Russia blackmail, with threats to weaken its guarantee of security for Armenia against Azerbaijan, and to make life difficult for the Armenian diaspora in Russia.

As a result of joining the Eurasian Economic Union Armenia has been obliged to raise its import tariffs at the WTO, i.e. cutting itself out of European and world markets. Armenia was so unhappy about this that it requested exemptions from the common external tariff of the Eurasian Economic Union for as many as 800 tariff lines, and had to spend it first year in the Union trying to negotiate at least transitional arrangements to slow if not to stop these protectionist steps. On top of that the Russian economy went into recession and pulled the rest of the Eurasian Union down with it. Figures show a drop of exports from Armenia to Russia from €331.9 million in 2013 to €225.8 million in 2015 (without re-exports)[8]. In brief, if President Dodon were to look at Armenia’s experience in the Eurasian Economic Union, he will not see a pretty sight.

All of this means, in a nutshell, that President Dodon is already damaging the Moldovan economy by creating strategic uncertainty over its future for foreign investors. The idea of Moldova repealing the Association Agreement with the EU in order to join the Eurasian Economic Union is entirely feasible technically, and an open option politically as of today (with 40-50% support from recent polls). However, this would be as close to economic suicide as Moldova could possibly imagine.

[2] National Bureau of Statistics of Moldova

[3] The data exclud the exports from the Transnistrian separatist region

[6] National Bureau of Statistics of Moldova

[7] The data exclud the exports from the Transnistrian separatist region