In recent months, the situation in our banking system has worsened considerably. All institutions responsible for the economic security silently allowed these fraudulent mega-transactions to materialize, therefore leading to the de-capitalization of these three systemic banks. The weakening economy, along with the inefficient activity of the state institutions will affect the banking assets’ quality and generate new challenges for the banking sector. Also, exchange rate volatility and low confidence in public authorities and banks pose a risk to the financial stability of the entire banking sector.

The banking sector was disturbed by a series of dubious “mega-transactions” at the end of 2014. As a result, three involved banks have been drawn into a critical situation. During 2014, Banca de Economii, Banca Sociala and Unibank have significantly increased their balances on investments abroad. Thus, in Oct:14 the three banks held external investments of about MDL 9.4 billion, which represented 63.9% of the outstanding debts of foreign banks to financial institutions in Moldova. In Nov:14, the three banks withdrew their overseas investments (at least such operations have been reflected in the banks’ activity reports). Also, in Nov:14 Banca de Economii obtained funds from the interbank market and reallocated resources amounting approximately 11.1 billion MDL to Banca Sociala. Based on the information on banks’ economic and financial activity, it may be presumed that the amount offered by Banca de Economii was covered by the money withdrawn from abroad. Based on the same sources of information, it may be stated that the following operations were performed at the Banca Sociala: it withdrew its investments from abroad, received funds from Banca de Economii, and used these sources in a suspicious way. The suspicious use of the funds has been reflected in the accounting records of Banca Sociala as an excessive “thickening” of about 17.8 billion MDL in the category of “other assets”. Additionally, Unibank has also granted a transfer of funds in favour of Banca Sociala.

As a result of dubious transactions in the banking sector, a large capital gap has been created. Thus, whereas the minimum limit for principle 2 on current liquidity is 20%, in Feb:15 this indicator was much lower in all 3 banks: Banca de Economii (-3.6%), Banca Sociala (-69.2%) and Unibank (8.2%). At the same time, due to the enormous volume of toxic assets held by the 3 problematic banks, these financial institutions did not meet the criteria concerning the risk weighted capital adequacy, which is regulated to a minimum of 16%. By the end of February, the three banks had the following capital adequacy ratios: Banca de Economii (2.4%), Banca Sociala (2.9%) and Unibank (15.8%). The alarming situation at these banks motivated the NBM to establish a special administration over these institutions. Additionally, the operations performed by the three banks, along with other factors, such as decrease of exports and remittances and depreciation of the Russian ruble, have fuelled the depreciation of the MDL.

As a result of the suspicious transactions from the banking sector, large amounts of foreign currency have “vanished”. This fact is also supported by the foreign currency interventions made directly by NBM in favour of the 3 banks, operations that have been performed during Dec:14-Feb:15. Thus, the NBM performed special interventions by selling foreign currency to the Banca de Economii, Unibank and Banca Sociala in Dec:14 (USD 221 million, of which USD 167.1 million were designated to close the previously opened foreign currency swaps), in Jan:15 (USD 4.1 million) and in Feb:15 (USD 6.8 million). 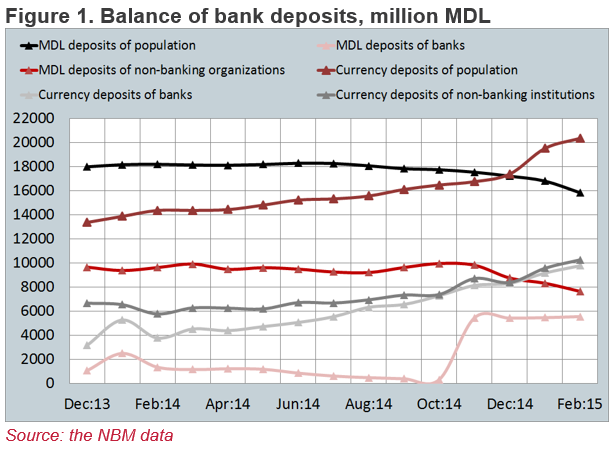 In the context of economic uncertainty, increasing rates of monetary policy and the decrease of banks' activity under special administration, the banks’ lending activity has decreased. After the „anomalous explosion” of loan granting as of Nov:14, within Dec:14-Febr:15, the volume of new bank loans decreased by 16.2% y-o-y, although this decrease has slowed down: in Nov:14 the slump was of -40,9% y-o-y, while in Feb:15 it was of -5.6% y-o-y. Decreases were recorded for both loans granted in MDL and foreign currency. One factor behind this development was the monetary policy tightening that led to more expensive bank loans, which consequently made the population and economic agents be reluctant to access loans. Additionally, the significant depreciation of MDL also generated increased costs related to servicing the loans in foreign currency. In these circumstances, companies are more reluctant to take foreign currency loans and attempt to identify other solutions to finance their economic activities. Also, given the worsening economic perspectives, banks became more cautious in granting loans. Another obvious factor is the reduction in the lending activity of the three banks placed under special administration. 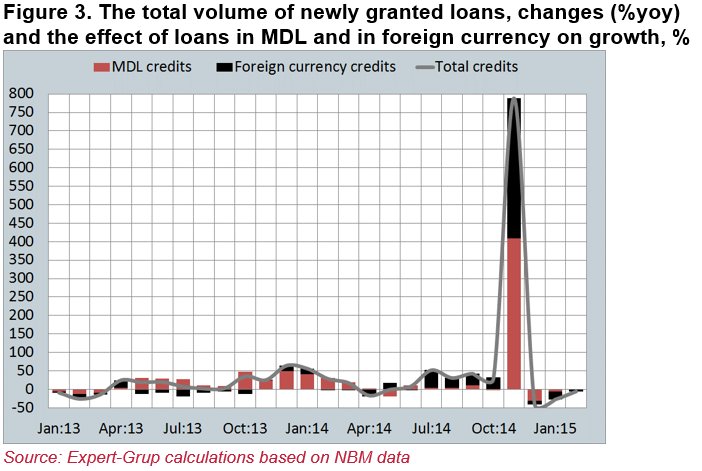 The worsening trend of the loan quality portfolio was resumed from Dec:14. The worsening of the loan portfolio is specific to the entire banking sector. Although this development is more critical for the three problematic banks: Banca de Economii, Banca Sociala and Unibank, the rest of the banking sector also registered an increase of the amount calculated for loss in assets and conditional commitments. Thus, in Feb:15 the amount calculated for loss in assets and conditional commitments decreased by 19.8% y-o-y for the entire banking sector, and, if to exclude the 3 problematic banks, the decrease was of 6.3% y-o-y. The deterioration of loan quality should be related to the worsening economic situation, which makes it more difficult to repay loans, but also to the tightening of monetary policy, which leads to restrictions in loan granting activity. 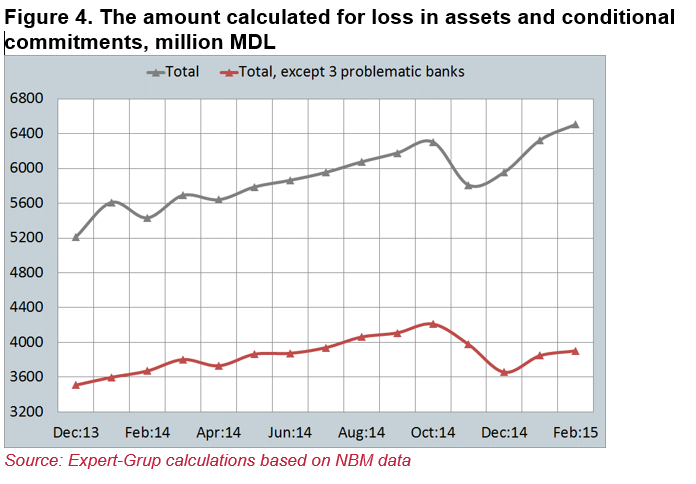 In the banking sector (excluding the three problematic banks) an accumulation of liquid assets is recorded. In the banking sector, except for Banca de Economii, Banca Sociala and Unibank, in Feb:15, the current liquidity level increased by about 3 p.p. y-o-y and then in Jan:14 the growth was of 3.4 p.p. This development is a result of the diminished volume of granted loans. Another cause of the increase in liquid assets is the fact that banks have significantly decreased the supply of liquidity by purchasing NBM Certificates, despite the fact that the increasing rates of monetary policy made this instrument more attractive. 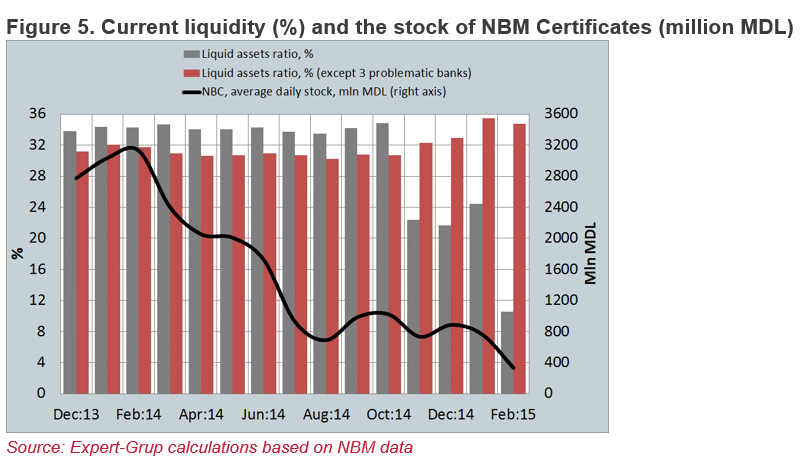