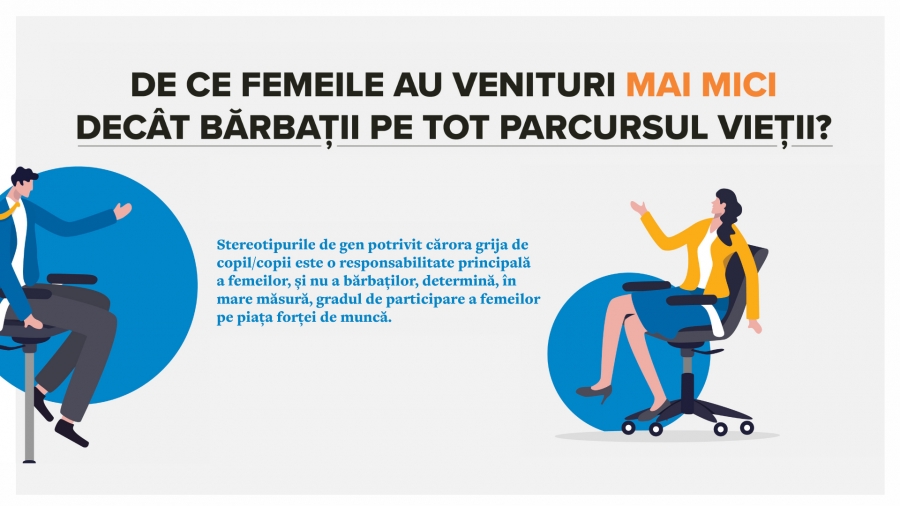 The lack of a work-life balance, childcare and household responsibilities, which are unfairly shared between women and men, has economic implications for the life cycle. Throughout life, the average consumption of women (public and private) on average is the same as for men, but their income from work is considerably lower. At the same time, women's life expectancy is more than eight years longer than men's, so when they reach retirement age, they are at increased risk of poverty.

These are among the main findings of the study: ”Why women tend to earn less than men? Assessment based on the National Transfer Accounts”, launched today by the Independent Think-Tank ”Expert-Grup”, in the framework of a public online event, with the financial support of the Austrian Development Agency and the UN Population Fund (UNFPA).

Stella Avallone, Ambassador Extraordinary and Plenipotentiary of Austria to the Republic of Moldova: ”When a country manages to promote work-life balance, to promote childcare programmes and facilitate women’s participation in the labour market, all this are paying off in economic terms and in building social cohesion. I hope that the findings of this study will support the Moldovan Government and private sector in breaking down the gender pay gap, promoting gender-responsive family policies and empowerment of women”.

Adrian Lupusor, Executive Director, ”Expert-Grup” Independent Think-Thank: ”In terms of employment and income, the pandemic crisis has disproportionately affected women. The aim of this study is to understand from a more fundamental perspective why even up to this crisis women have a consistently lower income than men”.

The study shows that the total deficit in women’s life cycle** is 2.3 times higher than men’s. Women enter the labour market later than men because their enrollment in higher education institutions is higher than that of men. However, the fact that the number of women with a university degree is higher is not a factor that will ensure them a higher or at least equal income to that of men. Moreover, until the age of 35, women's income from work is considerably lower than that of men, a period that coincides with the birth and upbringing of children.

Tatiana Zatic, State Secretary, Acting Minister, Ministry of Health, Labour and Social Protection of the Republic of Moldova: „In monetary value, the annual financial loss of women reached the value of about 17 thousand le (MDL) I, which means that a woman has to work two months longer to reach the average annual salary of the man for the previous year. These lifelong financial inequalities contribute to an even greater gap in the stage of receiving the old-age pension”.

Labour income of women and men becomes almost similar only by the age of 50. Subsequently, in the age range 57-66 years, there is a decrease in work income of women, due to reaching retirement age, and after 66 years they reach similar values in both sexes.

Natalia Plugaru, Assistant Representative of the United Nations Population Fund (UNFPA) in the Republic of Moldova: “The problem of lower-income women compared to men is a complex one, is rooted in gender inequality and norms that persist in society. For example, we know that very few men take childcare leave in Moldova, with women being the main caregivers. As a result, both partners suffer - fathers who lack a stronger emotional connection with their children, but also mothers who feel they have not been able to fully realize both maternal and professional potential”.

Wage discrimination of women is another factor determining the low level of income from their work. In 2019, the gender gap in total pay by the economy was 14.1%. The largest differences between men's and women's wages are in the areas of financial and insurance activities (42.9%), information and communications (35.7%), industry (20.9%), health and social assistance (with 19,6%).

Olga Gagauz, Researcher, Center for Demographic Studies of Moldova, National Institute for Economic Researcher, author of the study: “Studies in this field show that the gender pay gap is specific to all European countries. In the Republic of Moldova, this phenomenon is determined by the predominance of women in low-wage activities such as health and social assistance, education, accommodation and food activities, trade and industry, a high share of women employed incomplete working day, reduced number of them at management positions”.

A decline in the population and its ageing process is expected in the coming decades, and in these conditions increasing women's participation in the labour market is essential. What can we do now:

- Eliminate the wage gap between women and men;

- Eliminate regulatory barriers for women who want to work according to the specialities traditionally considered masculine;

- Providing trainings to women regarding the skills needed for leadership positions;

- Facilitating the process of reintegration of women into the labor market after childcare leave;

- Combating stereotypes regarding the social roles of women and men, including in the field of education and career guidance.

*The study “Why women tend to earn less than men? Assessment based on the National Transfer Accounts” is developed within the UNFPA’s project “Expanding Choices: Gender-Responsive Family Policies for the Private Sector in the Western Balkans and Moldova”, implemented by UNFPA with Austrian Development Agency’s support in collaboration with Ministry of Health, Labor and Social Protection of the Republic of Moldova.

** The life cycle deficit is a key category of National Transfer Accounts. It is calculated as the difference between age-specific consumption (private and public) and income from work, allows the measurement and analysis of the degree of economic dependence of the population during life, including gender profile