Economic Cost of Gender Inequalities in the Republic of Moldova – How Does This Affect Our Society? 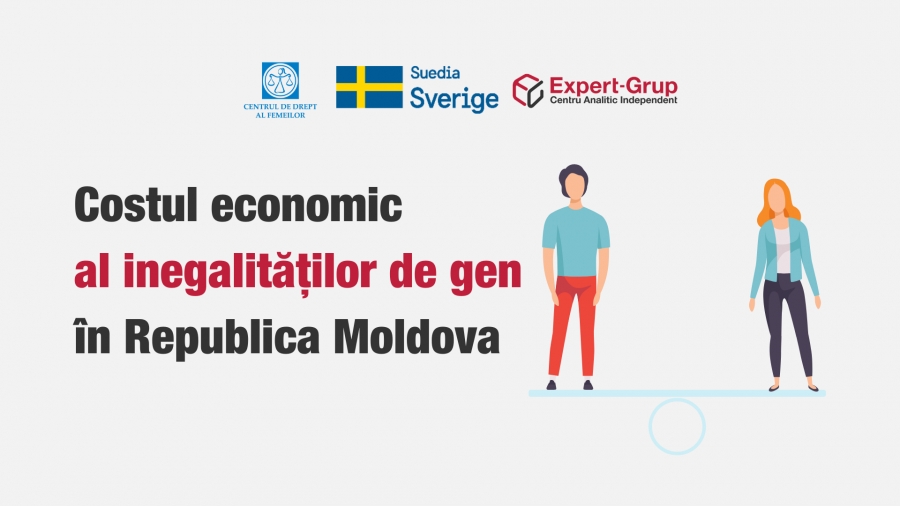 Gender inequality in the Republic of Moldova costs us tens of billions of lei loss in the State Budget. If economic inequalities between men and women were eliminated, the country’s GDP would grow by up to 20% or by about 39 MDL billion’, are several data presented today during the launching event of the study entitled ‘Economic Cost of Gender Inequalities in the Republic of Moldova’, developed by Expert-Grup in partnership with the Women's Law Centre and with the financial support of Sweden.

„For economists, inequality represents, by definition, a suboptimal allocation of resources, which leads to economic and social losses. Unfortunately, in case of gender inequality, we register significant losses every year. It is about tens of billions of lei that the Moldovan economy is losing for the simple reason that we do not have a balanced rate of gender equality”, stated Adrian Lupusor, Executive Director of the Independent Think-Tank Expert-Grup.

According to the study, women face difficulties in getting back to work after giving birth. The challenges are related to the design of relevant policies, shortage of quality nursery services, inflexible attitude of employers, as well as tradition, cultural peculiarities and gender prejudices that determine women to give up on their professional activity. According to the data provided by the National Social Insurance House, as of 1 January 2020, from the category of socially insured individuals, 39,458 mothers and 7,136 fathers were on partially paid childcare leave and were receiving monthly childcare allowance.

„Development and efficient implementation of measures to harmonise the professional and family lives should become a priority for the national authorities. The lack of such measures primarily affects women, who usually are forced to give up on their job and their professional development. Moreover, the difficulty to return to the labour market emphasizes the financial vulnerability of women and directly impacts the country’s economy”, mentioned Natalia Vilcu, WLC Executive Director and co-author of the study.

The authors of the study believe that the national law does not contain provisions that would motivate mothers and fathers to share the childcare leave, and if they decide to use nursery services, women face prejudices and judgement. ‘...In our culture, mothers who take their little children to a nursery are viewed as bad mothers. I sent my elder child aged 1 year and 8 months to a nursery in another settlement, because I started to work, and the majority of the relatives criticised me for that. In my opinion, many mothers would like to access nursery services, if there are any, but due to the social pressure, they relinquish and give up on their professional career’, mentioned one of the interviewees in this study.

In 2019, the Republic of Moldova had two nurseries and both of them were located in the urban area. Given that 32.6 thousand children were born in 2018 and 34.1 thousand – in 2017, the number of ante-preschool education institutions and available places are obviously insufficient.

‘Gender inequality hinders the progress of any society as it restricts the opportunities of half of its population. When women are prevented from reaching their maximum potential, that very same potential is lost for the entire society. I hope that decision-makers will take into account the recommendations and conclusions of this study’, said Virginia Bîlici, Program Coordinator at the Embassy of Sweden in the Republic of Moldova.

To improve state of affairs in this field, the study comes with recommendations aimed to reduce gender gaps and their economic costs. The recommendations concern legal amendments, awareness raising and information activities on gender equality, the role of women and men in the society and family, reconciliation of private and professional lives, overcoming gender stereotypes.