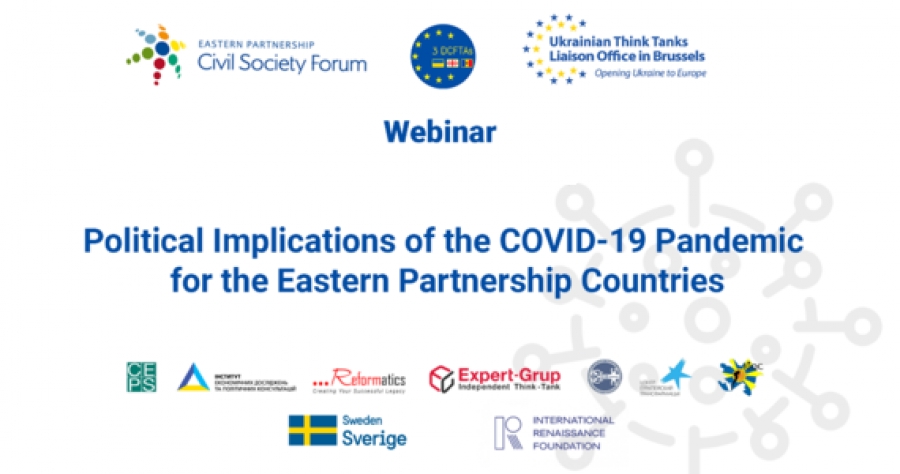 On 1 July 2020, the Ukrainian Think Tanks Liaison Office in Brussels, in cooperation with the “3 DCFTAs” Project and Eastern Partnership Civil Society Forum, and with the support of the International Renaissance Foundation, organised an online-webinar “Political Implications of the COVID-19 Pandemic for the Eastern Partnership Countries”.

Panelists and participants of the event discussed the latest developments in the Eastern Partnership countries with regard to the COVID-19 pandemic in the region and its impact on the overall political environment within each country, some of whom are also facing elections. In particular, the following issues were touched upon: state of emergency and concerns for civil liberties; governments’ handling the pandemic; impact on political parties, civil society and media; foreign policy orientations of leadership and populations.

Olena Carbou, Ukrainian Think Tanks Liaison Office in Brussels, Belgium, opened the event, emphasising that this is already the second webinar connected to the Eastern Partnership countries. This time the event is devoted to the political implications of the COVID-19 pandemic for the countries of the region. Given the fact that the Eastern Partnership countries are diverse in their political systems, this webinar provides an opportunity to make an input into the global discussion on which of the political systems is fighting with the COVID-19 pandemic better.

Carbou: “Since the COVID-19 pandemic has started, the question who (democracies or autocracies) is coping with this problem better is quite discussed”. Michael Emerson, CEPS, Belgium, underlined that the Eastern Partnership states comprise four semi-democracies and two outright autocracies. For now, it is clear that the autocracies have performed badly and lost public support. Among the semi-democracies, only Georgia has performed well. The performances of the other states are described by the experts as somewhere between the incompetent and disastrous.

Emerson: “We have elections coming up: for the presidency in Belarus in August and for the parliament in Georgia in October. It will be interesting because these are the two polar cases”.

Tamara Kovziridze, Reformatics, Georgia, described the current situation in Georgia. She mentioned that at the beginning of 2020 the political landscape in Georgia was considerably polarised.  The opposition parties’ attempts to unite and decrease of the popularity of the government were observed. Besides, the opposition parties and the government were trying to agree on a compromise about the new electoral system and the release of the political prisoners. Finally, with the involvement of the US, EU and German ambassadors a compromise was made and the number of proportional representation in the parliament was increased. Then, the virus outbreak started. Georgia handled it quite well, especially in comparison with the other countries of the region and beyond. In total, there are less than 1000 cases of COVID-19 in the country. According to Ms Kovziridze, it is the result of the strict lockdown measures. However, a very dramatic economic impact of the lockdown is expected. Therefore, it is unclear what will happen with the popularity of the government.

Kovziridze: “The government managed to handle the COVID-19 crisis well”. Benyamin Poghosyan, Political Science Association of Armenia, Armenia, stressed that after the Velvet revolution in 2018 the popularity of the Prime Minister Nikol Pashinyan was very high. During the December 2018 snap parliamentary elections, his “My step” coalition secured two-thirds majority in the parliament. However, even before the outbreak of the COVID-19 pandemic, there was some decline in Pashinyan’s popularity. The main reason was the absence of positive changes in the socio-economic situation in the country. From the beginning of June 2020, several opposition parties started to demand the resignation of the Prime Minister and change of the government. The situation became more complicated with launching the criminal investigation against the leader of the biggest opposition party MP Gagik Tsarukyan and the government’s decision to amend the constitution and fire three judges of the constitutional court appointed before the Velvet revolution. As of now, many people in Armenia are disappointed with the Prime Minister but there is no real opposition figure that can compete with him.

Poghosyan: “Now we are in some kind of constitutional crisis”. Shahla Ismayil, Women Association for Rational Development, Azerbaijan, Steering Committee EaP CSF, noted that despite the very strict prevention measures, the number of newly infected people in Azerbaijan has been rising rapidly. Since 21 June, the second round of the strict lockdown was applied in the country. This situation is challenging government stability. However, this process is not related only to COVID-19. Despite the last decades of huge oil revenues, there is a lack of economic diversification, restrictions of civil liberties and crackdown on CSOs in Azerbaijan. The COVID-19 pandemic has brought up a lot to this context; many things were discovered and disclosed, especially in terms of corruption. The crackdown on CSOs since 2014 has heavily damaged the civil society sector. As of now, only a few organisations are capable to operate as they used to and support the government’s efforts to respond to the COVID-19 issues. That’s why, according to Ms Ismayil, the government should lack their support.

Ismayil: “Situation in Azerbaijan is getting more and more challenging”.

Denis Cenusa, Expert-Grup, Moldova, emphasised that Moldova has political landscape, which is geopolitically divided. Before the COVID-19 crises started, it was clear that the Socialists need partners in the Parliament in order to govern in a smooth way. They built a coalition with the Democratic Party, which was disintegrating. The current composition of the Moldovan parliament is fragmented and not really democratic, therefore, there is an idea that it should be dismissed, but this scenario is not possible due to the presidential elections scheduled for November 2020. These elections are going to be complicated for the incumbent President Igor Dodon, while the popularity of his main opponent Ex-Prime Minister Maia Sandu is growing.

Cenusa: “The government’s actions in managing the pandemic are characterised by the opposition as catastrophic”. Veronika Movchan, Institute for Economic Research and Policy Consulting, Ukraine, stressed that last week the number of the COVID-19 cases was very high in Ukraine, but last few days this number reduced again. It can be expected that the infections numbers will be at this level for some time during the period of adaptive lockdown. Even this shock has very strong implications for the economy and political situation in the country. The recent polls showed that Zelensky lost for the first time the support of the majority of the population. 38% of people still support him, while 45% do not approve his policy. According to Ms Movchan, Ukraine’s government has a difficult time now. The government led by Honcharuk was dismissed on 4 March just before the pandemic crisis. After that, Ukraine has an unstable government. The leadership of the Ministry of Healthcare was changed already twice. Besides, there are scandals related to acting Minister of Education (newly appointed) and Minister of Internal Affairs. Moreover, there is a growing number of cases against activists and Ex-president Petro Poroshenko as well as discussions that depict civil society as guided by external interest and foreign donors.

Movchan: “Zelensky lost the support of the majority of the population”. Andrei Yahorau, Centre for European Transformation, Belarus, EaP CSF, underlined that Belarus is the leader in the total number of infections among the Eastern Partnership countries. This negative situation is the result of incompetent government policy to handle the crisis. There was no lockdown and no quarantine in schools and universities. The economic consequences of introducing a lockdown seemed to be a greater risk for the government than the risk of the spread of COVID-19. However, the government mobilised the healthcare system and organised mass testing of infected people. The information policy with the denial of the seriousness of the pandemic and manipulations with the statistics on COVID-19 was the most disastrous. This resulted in a rather negative perception of the government’s policy to handle the crisis by the population. 55% of people think the government’s reaction is insufficient. Therefore, the population’s protest sentiments in Belarus grew. It has a significant impact on the ongoing electoral campaign for the upcoming presidential election in August 2020. Natalia Yerashevich, Director of the Secretariat of the EaP CSF, Belgium, pointed out that the prior existing problems in the Eastern Partnership countries affected the ability of the governments to address the COVID-19 crisis. Besides, the modest progress of the countries in terms of democratic transformations and necessary stability of regimes for implementing the reforms can be gone. It will be quite difficult to maintain the existing pace of reforms. There are many other matters of concern: trade-offs between measures taken to combat COVID-19 and human rights; freedom of expression and media; access to the information, level of trust to the COVID-19 related statistics, rights to peaceful assembly, etc. According to Ms Yerashevich, the situation will become even less stable in autumn when the effects of the economic crisis come.

Yerashevich: “The crisis has made a quite unstable situation in the region even more unstable”.