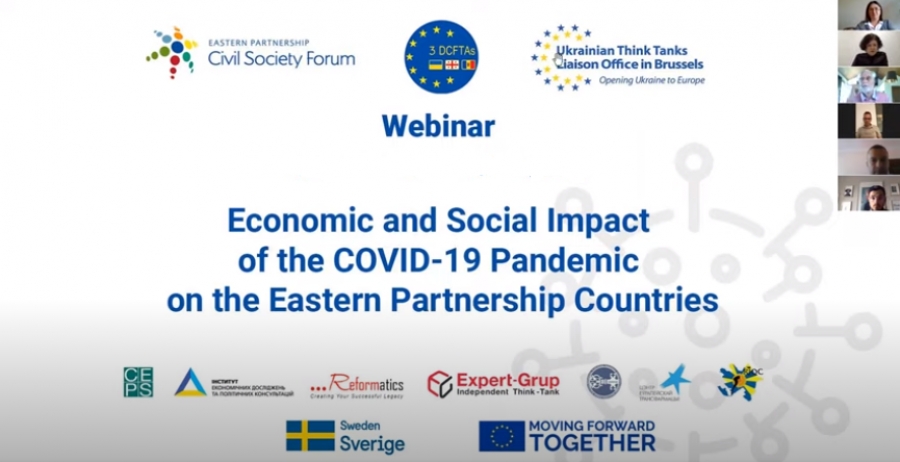 On 17 June 2020, the Ukrainian Think Tanks Liaison Office in Brussels, in cooperation with the “3 DCFTAs” Project and Eastern Partnership Civil Society Forum, and with the support of the European Union, organised an online-webinar “Economic and Social Impact of the COVID-19 Pandemic on the Eastern Partnership Countries”.

Panelists and participants of the event discussed the current situation in the EaP countries focusing on the following issues: preventive measures and macroeconomic impact of the COVID-19 pandemic, impact of the pandemic on important sectors, social impact, as well as evaluation of the hardship of the crisis and societal solidarity and resilience to it. The webinar provided necessary analysis to understand and estimate potential of the EaP states with regards to their ability to implement or continue reforms, as well as forecast their further social and economic development. Panelists also discussed needs of the countries as well as domestic and international response to it, including the EU’s aid and support. Olena Carbou, Ukrainian Think Tanks Liaison Office in Brussels, Belgium, opened the event emphasising the importance not only to see the situation in each of the EaP courtiers but to have an overview of the whole region, compare and exchange the best practices.

Carbou: “Knowing the impact of the COVID-19 on social and economic developments of these countries will also help us to understand the opportunities and threats to continuation of reforms by those EaP states, including Ukraine, which have signed Association Agreements with the EU”. Michael Emerson, CEPS, Belgium, stressed the value of the discussion, which covers the complete spectrum of different approaches to tackling the COVID-19 crisis. Mr Emerson also noted that the “3 DCFTAs” Project issues a series of bulletins devoted to the situation in all European Neighborhood countries.

Emerson: “The big policy issue to be clarified is how tough and fast should the lockdown business be in order to get optimal results both from the epidemiological point and the economic and social consequences”. Jeroen Willems, DG NEAR, European Commission, made an overview of the EU assistance to the EaP countries aiming to support them in the fight against COVID-19. According to Mr Willems, the EU together with the member states managed to mobilize ≈1bln EUR of grant assistance to the EaP countries in the framework of the “Team Europe” COVID-19 response. The EU put in place 80 mln EUR for the short-term response. However, the real socio-economic impact is still ahead, and the EU put in place around 900 mln EUR of grant assistance for the Eastern Partnership in order to support SMEs, fiscal systems and civil societies. In addition, the EU also provides loans to support some EaP countries.

Willems: “We try to put in place facilities to civil society that ought to allow the most vulnerable groups not to be the ones that are hit the hardest by this pandemic”. Tamara Kovziridze, Reformatics, Georgia, presented a brief overview of the situation in Georgia. According to Ms Kovziridze, there are 888 cases of infection in Georgia so far, while about 82% have already recovered. Now Georgia is in the process of lifting the restrictions. As for the economic impact, IMF projects negative growth of -4% in 2020, while EBRD projects negative growth at -5.5%. However, the final economic performance could be worse. Besides, Georgia does face problems with foreign investments and pressure on the balance of payment because the country depends on revenues from tourism and services sector. According to Ms Kovziridze, the picture looks good in terms of human health situation, but the projections are not very promising on the economic part. Besides, the economic situation could be further aggravated due to the upcoming elections in autumn 2020, which add to the uncertainty in terms of business decisions and have a negative impact on investment dynamics, whereby private sector is in “wait and see” mode.

Kovziridze: “Georgia has coped comparatively well with the COVID-19 crisis so far”. Benyamin Poghosyan, Political Science Association of Armenia, Armenia, noted that the situation in the public health sphere in Armenia is not as good as in Georgia. Despite the 40-days lockdown was put by the government, many people didn’t follow the rules and there were no government efforts to enforce the lockdown. Starting from the end of April, there was a significant growth of the COVID-19 cases. Nevertheless, from 4 May there are no lockdown measures in the country. As of today, more than 17000 people are infected in Armenia. In April, the country’s economy declined by more than 17%. The government predicts 2-3% economic decline in 2020, independent experts expect a 7-10% decline.

Poghosyan: “Situation in Armenia unfortunately is not as good as in Georgia”. Denis Cenusa, Expert-Grup, Moldova, stated that the number of infections in Moldova is increasing. Moldova was the only country of the region that introduced state of emergency for two months but this period didn’t really help the authorities to contain the virus. The highest number of cases (406) since the beginning of the pandemic was registered on 11 June. According to Mr Cenusa, the sentiments in the country are that the authorities are not capable to efficiently manage the crisis. It is noteworthy that about 17% of the infected people are medical personnel. In the Transnistrian region, the number of infections is quite low. The forecasts envisage 6% GDP decrease in 2020, but the real number can be much higher due to deepening of health crises and worsening of the economic indicators. Moreover, the droughts have compromised the 2020 harvest of various crops.

Cenusa: “Situation in Moldova is not in a good shape”. Veronika Movchan, Institute for Economic Research and Policy Consulting, Ukraine, noted that Ukraine also observes the increase of the COVID-19 cases. The number of newly registered cases increased from 500 to about 700 cases per day. Nevertheless, there are some data that shows that the situation might not be as bad as it was in some European countries. First, Ukraine has finally started testing much more actively than before. Second, the number of total deaths cases in the country is not higher compared to the previous year. Third, Ukraine doesn’t have huge pressure on the healthcare system at least in terms of bed occupancy. In the economic sphere, Ukraine definitely faces a crisis. According to different assessments, the range of GDP decline varies from 2% to 11%. On average, GDP is estimated to drop at 5-8% in 2020. So far, the reduction in agriculture was the smallest, by several percentage points only, although a negative impact of the drought could reveal itself later in the year. According to Ms Movchan, Ukraine has very low inflation and stable exchange rate now, but import is declining, unemployment is growing and vacancies have also reduced. Ukraine’s macroeconomic fundamentals have been much sounder now than during the previous crisis episodes, and thus the county could have a quicker recovery. However, if the revisionist forces in domestic politics take over and ruin the fundamentals, the crisis could become deeper, while the recovery – slower.

Movchan: “In Ukraine, the situation is similar probably to Armenia and Moldova”. Andrei Yahorau, Centre for European Transformation, Belarus, EaP CSF, stressed that Belarus has 56000 COVID-19 cases now, but there is a trend of decreasing of new cases. Overall, the situation is not good. In terms of the public health sector, the situation seems to reach its critical level of sustainability. Besides, there are a lot of doubts about the correctness of the statistic data, especially the data on the deaths rates. In terms of the economic situation, the Belarusian economy suffers from two main shocks: COVID-19 effects and drop of revenues of oil exports. According to forecasts, GDP is expected to drop by at least 4% this year. IMF prognoses about 6% GDP drop. Besides, Belarus faces a decline in foreign trade. According to Mr Yahorau, the situation on the labour market is more or less stable, but people are concerned about incomes decline and possible unemployment.

Yahorau: “Belarus has the largest number of infections among the other EaP countries”.