According to the Open Budget Survey 2019, the Republic of Moldova is not moving forward in terms of budgetary transparency 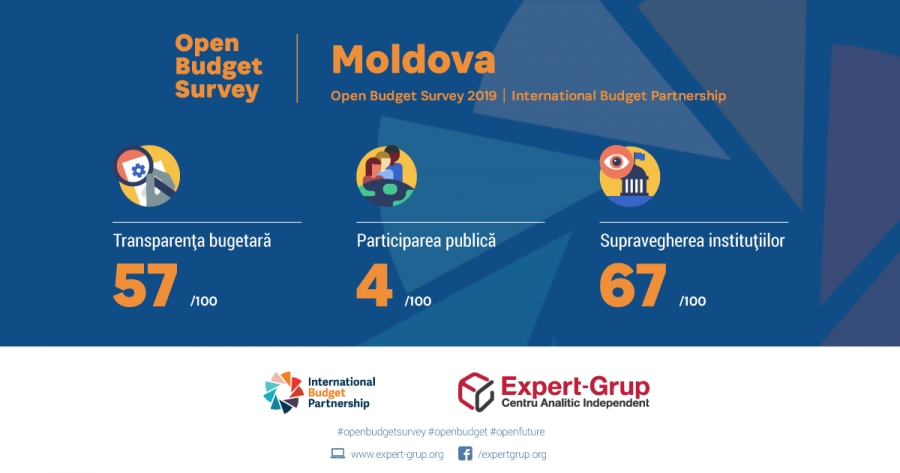 Amid a global pandemic that is forcing governments around the world to launch new spending measures, the International Budget Partnership’s (IBP) latest Open Budget Survey shows why there is reason for concern: four out of five of the 117 governments assessed failed to reach the minimum threshold for adequate budget transparency and oversight, under international standards.

Governments, for instance, often fail to publish key budget documents, that would clearly explain their budget policies, decisions and outcomes, according to the new report. Worldwide, one-third of the eight key budget documents that governments should publish are not available to the public.

While the latest Open Budget Survey (OBS) was completed just before the pandemic hit, it provides a telling snapshot of current government practices in 117 countries related to budget disclosure, opportunities for public engagement in the budget cycle, and effective checks and balances.

When it comes to the results of the Republic of Moldova, the new ranking shows that, in terms of budgetary transparency, the Republic of Moldova has a score of 57 points out of 100, a score close to the evaluation in 2017, when a total of 58 points was reached. The result indicates a limited disclosure of information on budgetary documents and places the Republic of Moldova on the 39th place out of 117 countries that were included in the evaluation, along with countries such as Hungary, the Czech Republic and Slovakia. Unlike the 2017 evaluation, OBS 2019 shows an increase in the detail of budget documents, especially annual reports, however the authorities remain lagging behind in drafting and publishing mid-year reports, but also in terms of budgetary discipline.

The study also shows that Moldova has a level of oversight by Parliament and the Court of Auditors of 67 points out of 100. Similar to countries in the region such as Bulgaria and Croatia, but significantly lower than Ukraine, which recorded 87 points.

In terms of participation, the Republic of Moldova registered a downward trend compared to the evaluation 2 years ago, from 7 points to 4 points, which means that the government fails to involve citizens in the budget process. Although the involvement of citizens in the budget process is one of the pillars of good governance, few countries manage to involve citizens throughout the budget process, due to lack of participation mechanisms, the overall average in this regard recorded 14 points out of 100, states the report. The score registered by the Republic of Moldova, indicates a proximity to neighboring countries such as Romania and Hungary.

Although only 31 of the 117 surveyed countries have sufficient levels of budget transparency, faster progress is possible, when countries are committed to open budgeting reforms. Guatemala, Indonesia, the Kyrgyz Republic and Ukraine are several exemples.

The Open Budget Survey is a research, conducted every two years, which assesses the level of budgetary transparency of over 100 countries in the world in the light of internationally accepted best practices. In its seventh edition, this year's survey presents the Budget Transparency Index, the power of oversight of the budget process by the Court of Accounts and Parliament, but also the level of citizen participation of 117 countries around the world. The Republic of Moldova has been officially participating in this survey since 2017.