Economic challenges following political turbulence: what awaits us in the near future? 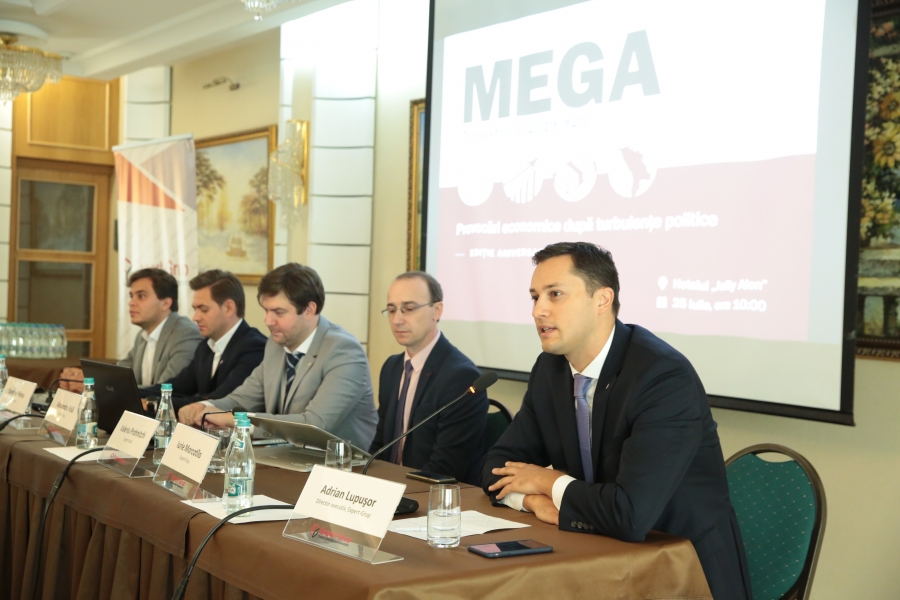 In 2019 and 2020 the GDP of the Republic of Moldova is to increase by about 4.4-4.5%, mainly due to industry and trade. In both sectors the gross added value will increase in 2019 by more than 6%, while lower growth rates of around 4% in industry and over 5% in trade are forecast for 2020. The gross added value in the agricultural sector will see a relatively modest growth in 2019 by about 1.8%, but in 2020, if climatic conditions are normal, the agricultural sector might grow by just over 4%. The construction sector is projected to grow by 6.8% in 2019 and by about 3.4% in 2020. The conclusions were drawn by the experts of the ”Expert-Grup” Independent Think-Tank during the launching event of the 20th edition of the economic report ”MEGA”.

Nearly one year after the entry into force of the tax reform, the experts are discussing its impact on income, employment and investment. The authors mentioned that "although the tax reform resulted in the reduction of the revenues of the state budget and the social insurance budget by about 700 million lei compared to the alternative scenario of no reform, it had a notable impact on the investment process. The growth rate of capital investment was more than 20 percentage points higher in the baseline scenario than in the alternative scenario. There has also been a noticeable decrease in the phenomenon of informal employment, estimated to about 3-4%, both for women and men".

The analysts discussed the multiple challenges that the public budget had to cope with. "The financial commitments undertaken by the previous government, guided by short-term political stakes, and the reduction of state budget revenues as a result of the tax reform, caused in the first five months of the current year a domestic deficit equivalent to 8% of the total national public revenues. The last time the budget system was under such pressures was during 2011-2012, which was a consequence of the financial and economic crisis of 2008-2009”.

While budget expenditures are expected to grow faster than the revenues, towards the end of the year the growth rates will gradually converge. "Our forecast is that in 2019 the total national public budget revenues will increase by 1.4% year-over-year, while expenses are expected to increase by about 7.8% year-over-year. The pressure on public finances will dissipate in 2020 due to faster growth of revenues and the rationalization of expenditures. Budget revenues will increase by about 3.5% compared to the previous year, including due to the positive medium-term impact that the 2018 tax reform will have on the tax base. We expect that a number of public expenditure commitments, particularly those related to investment, will be dropped, thus, the budget expenditure will decrease by about 3,2% year-over-year, ultimately leading to a deficit below 1% of GDP”.

In the context of the major political changes of 2019, the experts considered that developing a set of policy recommendations for the Government would be appropriate. The recommendations are intended to assist the Government in stabilising the public finance system in the short term and in promoting medium- and long-term development. The most essential recommendations include: ensuring tax policy stability; increasing the budget revenue by curtailing evasion; strategic evaluation of public spending and ensuring absolute transparency of the system of public finance and property. It is also imperative to ensure a better separation of the political sphere from the economic one and the establishment of mechanisms for avoiding conflicts of interest. Among the key priorities of the Government should be the independence of the central bank as an indispensable prerequisite for ensuring macroeconomic stability, better management of the external risks, ensuring transparency in the reform process of the labour relations and consolidating the institutional framework, as well as strengthening the national statistical system.