Expert-Grup: In 2019, the Moldovan economy will grow by only 3.5% - a series of external and internal risks will undermine the growth forecast for the next year 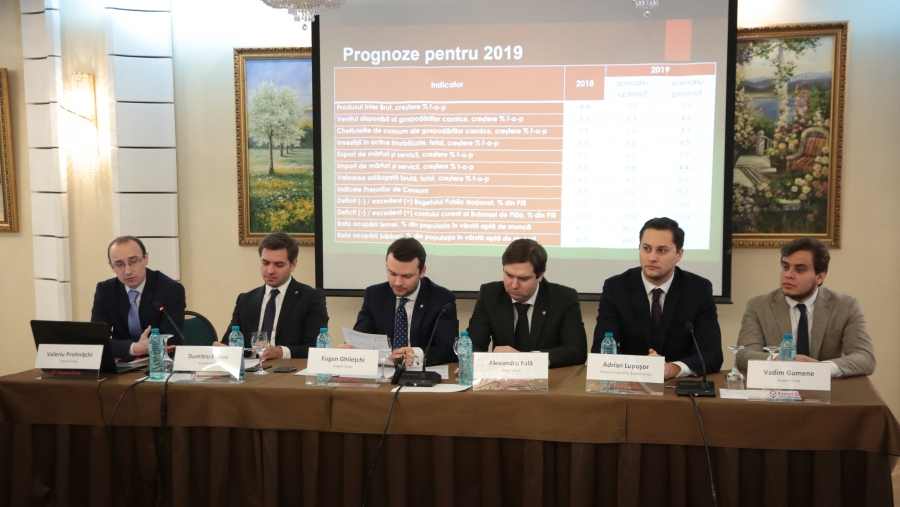 As part of the presentation of the biannual publication „MEGA” the experts from the Independent Think Tank Expert-Grup  shed light on the major economic evolutions of 2018, present economic forecasts and discuss the risks that can limit the next year’s growth.

According to the experts, in 2018 the Moldovan economy increased by 4.2% - 4.6%, on a broad basis, which included almost all key sectors. Concerning macroeconomic indicators as a whole, the current account deficit has been the most worrying evolution. At the same time, a number of defining structural and geographic trends consolidated further in the foreign trade, including a more augmented role of the EU. The experts mentioned that the remittances from emigrants, a key source financing consumption and therefore the economic growth, increased more slowly. It is worthwhile noting that in 2018 the EU area exceeded for the first time the CIS states in the geographical structure of the personal transfers made by emigrants living abroad (40% compared to 33%).

When it comes to the forecast for the next years, the analysts expect that GDP will grow from 3.5% in the pessimistic scenario to 5.2% in the optimistic one, still far below the optimal growth rate of 7-8%. Regarding the budget proposed for the next year, experts warn that “The proposed budget draft is based on growth rates that look too optimistic for some categories of revenues; moreover, the political context involving the two election exercises that are to be conducted at national and local levels - could lead to new budget liabilities. Both the optimistic and the pessimistic forecast scenarios hint to smaller revenues for the national public budget than the ones forecast by the authorities: by MDL 700 million in the optimistic scenario and by MDL 3,100 million in the pessimistic one. Missing the foreign assistance and incurring smaller tax revenues than expected will force the Government to increase internal borrowing, or might even require increasing certain taxes”.

The political climate is the biggest unknown among the risks that could undermine the forecast for 2019, with implications deep into the real economy and the balance of the national public budget. The surprising resignation of the NBM Governor, on the 20th of November, adds a new dose of uncertainty regarding the extent to which NBM will continue the strategy of direct inflation targeting, as well as ensuring and maintaining price stability on the mid-term. Traditionally, weather conditions remain a major source of risks.

As policy recommendation, the experts reiterate that caution and moderation are required in the fiscal policy in 2019, to ensure the middle- and long-term stability of the fiscal and budgetary system. In the sphere of financial regulation, a number of technical measures are required for a better evaluation of the risks associated to the financing of physical persons by non-bank credit organizations. At the same, it is imperative to speed up the investigation of the bank fraud and the recovery of the stolen assets, conclude the experts.

Following the recent reduction in the employers’ contribution to mandatory social insurance, a more effective package of measures is essential to reduce the phenomenon of informal employment. A number of political developments and declarations made the experts get back to the subject of capital amnesty and reiterate the need for abolishment of this policy.