Expert-Grup: Four years after the bank fraud, we continue to have more questions than answers 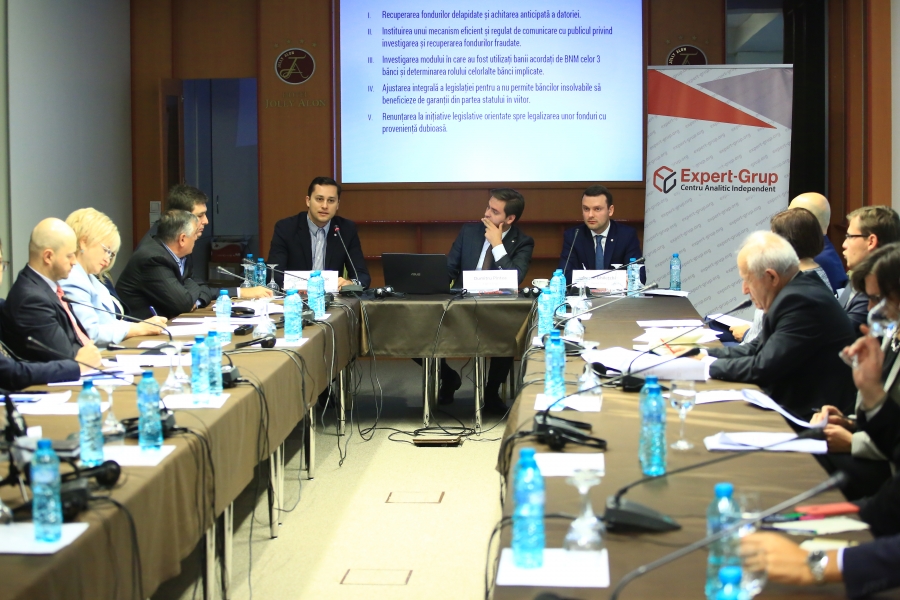 Four years after the adoption of government's decision to guarantee the emergency loans granted by the National Bank of Moldova to three insolvent banks, a series of questions remain unanswered regarding the phenomenon known as "the billion-dollar theft". After several investigations, we know that, although the idea of ​​an unfavorable regional economic climate was being employed, the crisis was nothing but the result of a huge bank fraud with the effective embezzlement of money from several banks. Moreover, this was not an isolated event, a number of well-defined actions being undertaken over several years. The lack of coordination between state institutions, poor combating of money laundering and political disputes at that time were only a few of the elements that allowed defrauding of three banks and stealing billions of lei by malicious factors. As a result of these actions, the bill is rather large - over MDL 13 billion placed on taxpayers, diminishing by 30% of MDL’s purchasing power and the liquidation of three banks, one of which was a state bank. Also, the bank fraud has also generated indirect costs, materialized by slowing economic activity, deteriorating of the investment climate and reducing confidence in state institutions. Subsequently, a number of reforms has been launched to strengthen the banking sector's resilience and to prevent repetition of such events. Despite this, the lack of consistency between different legislative acts still points to a certain risk of using public funds to save insolvent banks in the future.

The event brought back the issue of the damage caused by the fraud. "The billion dollar has not been precisely defined”, says Eugen Ghileţchi, an economist at the Independent Analytical Center "Expert-Grup" and co-author of the study. "The direct cost to the country's budget as a result of granting emergency loans is MDL 13.34 billion in bonds, with an additional interest of MDL 11.1 billion. Since the conversion of the guarantee into public debt, we have already paid MDL 1.49 billion for servicing this debt, while we recovered less than MDL 0.43 billion". The expert notes that no effort is being made for early repayment of the debt resulting from the fraud. This would reduce the pressure on taxpayers, as well as send a clear message for citizens that the authorities are doing their best to recover the embezzled funds. At the moment, there is also no clarity regarding the income from the sale of shares which were blocked and subsequently canceled by the NBM. The strategy for recovering funds stolen from the three banks mentions that up to MDL 2 billion will be collected from the sale of these shares, while their market value does not exceed MDL 1.2 billion.

Dumitru Pîntea, an economist at Independent Analytical Center Expert-Grup, states that "A complementary effect of the crisis was the beginning of the banking sector reform process following the best international practice. Immediately after the fraud, measures were taken to stabilize the situation, which allowed the resumption of cooperation with the main external partners and managed to prevent a depositors’ run on the banking system, to provide support to the national currency and to ensure state's access to external financial resources. With the adoption of the Law on bank recovery and resolution, new crisis intervention instruments have been transposed into national law, strengthening regulator's supervisory and regulatory powers seeking to improve the way in which banking activity is carried out. Last but not least, reform actions aim to strengthen the stability and role of the financial system for the economy and society as a whole, with a focus on adequate risk management, the prevention of destabilizing elements and the strengthening of public confidence".

During the end of the event, the analysts reiterated the importance of a timely recovery of embezzled funds and early repayment of fraud related debt, the cost for which will continue to grow in the coming years. It has also been proposed to set up an efficient and regular communication mechanism with the public on the investigation and recovery of embezzled funds. Ultimately, an imperative is the full adjustment of legislation to prevent insolvent banks from benefiting from state guarantees and giving up on legal initiatives that would allow decriminalization of suspicious funds, including those resulting from bank fraud.