State of the Country Report 2018: Marginal improvements, on the background of persistent problems 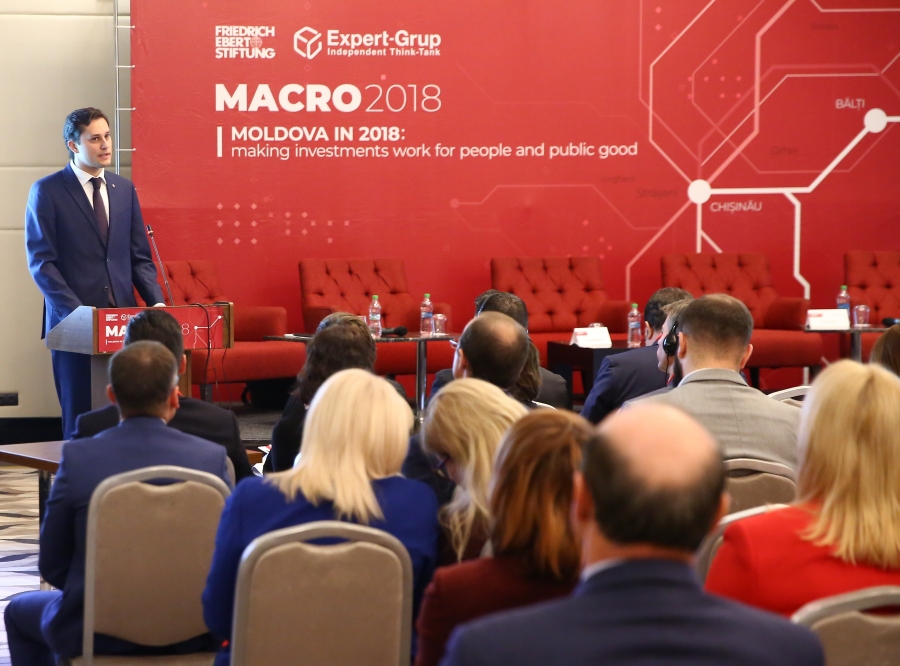 Today, October 19, in the framework of the 6th Edition of the Annual International Conference MACRO 2018, the Independent Think-Tank Expert-Grup in partnership with the Friedrich-Ebert-Stiftung Moldova is launching the State of the Country Report 2018 – a comprehensive radiography of the country's economic and social situation. The special issue of this year's edition is the role of investments in the economic development, the State of the Country Reportserving as a bridge between the presentations of the pannelists and the attempt to identify new investment attractiveness factors that would support the sustainable development of the Republic of Moldova.

According to the State of the Country Report, despite some marginal economic progress registred in 2017 – 2018 (economic growth of 4%, stabilization of the inflation and of the financial system), the fundamental constraints that undermined a noticeable improvement of the state of the country and the quality of people's lives have not been removed. In particular, there have been highlighted a number of unfortunate episodes that had a negative impact on public confidence in government and on the relations with the development partners. These include the adoption of a series of initiatives related to the modification of the electoral system, the invalidation of the elections in Chisinau, the initiative to exchange investments for citizenship, as well as theLaw on voluntary declaration and fiscal facilitation. All these episodes have confirmed the strong influence of obscure interests on governance, since they have been promoted in an undemocratic, non-transparent manner, and largely violating international good practices.

One of the key factors that allowed the economy to grow and diversify in recent years was the facilitated access to the European market. Adrian Lupusor, Executive Director of the "Expert-Grup" stated during the conference that "four years after signing the Association Agreement, statistical data suggest that the expansion of European exports has practically offset the losses incurred beacause of the Russian trade embargo and the conflict in Ukraine. Moreover, the trade balance with the EU has improved and exports have diversified, especially in the agri-food area. However, an overall assessment of the economy and foreign trade reveals a quite modest net impact of DCFTA, with Moldovan producers still having a lot  to do in order to fully capitalize on the trade opportunities of the European market”.

One reason why the local producers can not fully harness the opportunities provided by DCFTA is the lack of investments. Over the last 15 years, the lack of investments has significantly influenced the development of new production capacities, which  in their turn, have limited the expansion and diversification of  exports. The chronic shortage of domestic investment resources resulted also from the incapacity of banks to fully exercise their function of accumulating resources and allocating them to finance productive investments.

Other major constraints are related to the worrying demographic trends and the emigration of the working-age population, which translates into unavoidable pressures on the budget, driven by the falling of employment rates  and the increasing number of pensioners. According to Iurie Morcotilo, economist at Expert-Grup and co-author of the publication, "in one single decade, the number of pensioners increased by 23%, from 528 thousand in 2007 to 652 thousand in 2017, and the trend will continue in the following years. Raising the retirement threshold offers a temporary relief, rather than a sustainable solution to the problems of the public pension system. The demographic changes will put pressure on the healthcare sector as well as on the local budgets, especially given the fact that a large proportion of the elderly population will live solitary and will need access to social support services”.

As solutions, the experts reiterate the need to review fundamentally the economic growth model of the country, by expanding and diversifying exports through modernization of quality infrastructure and implementation of EU safety and quality standards. It is important that producer associations become more involved in promoting DCFTA, and the Government renegotiatethe access conditions for indigenous agri-food products that face high restrictive barriers on the EU market, such as tariff quotas for some products. The Government should continue its efforts to liberalize access to other partners’ markets, in particular for agricultural products. In this context, it is important to free the trade relationship with Russia from any political connotations and, in spite of all risks, to continue the efforts of negotiating free trade agreements with China, Switzerland, Canada, Israel and some Middle East countries.

Given that the substantial increase in exports will be possible only in the case of increased investments, especially foreign investments, it is necessary to identify new investment attractiveness factors for the country. In this respect, it is necessary to promote international trade integration by increasing the efficiency of management at company level and facilitating the access of the population to consumer credit. In addition, it is necessary to further improve the access of companies to long-term bank credit, facilitate labor mobility and take active measures of industrial policy, competitiveness and human capital development.