Expert-Grup: the Early Warning Index signals a slowdown of the economic growth for the coming months 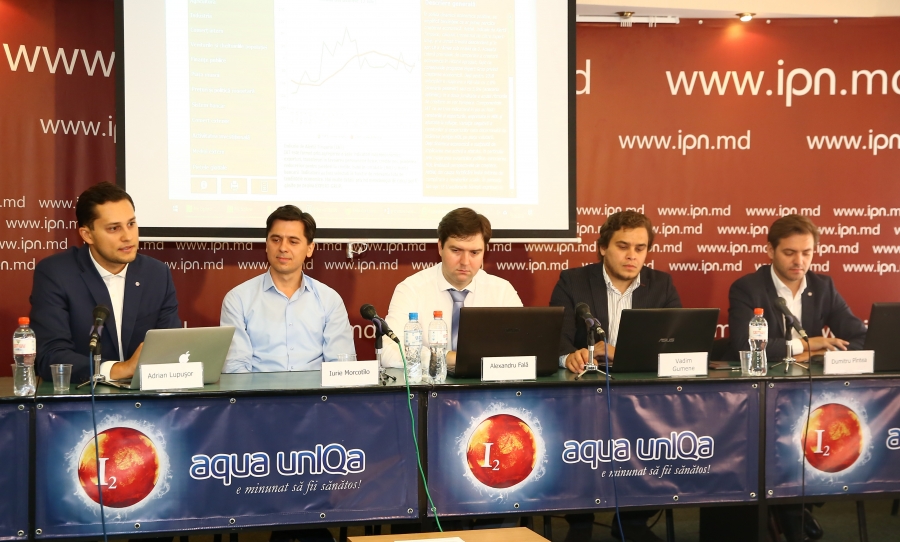 Despite the positive economic dynamics of the recent months, there are signals that the economic growth will slow down in the nearest future. The factors that will limit the economic expansion are determined by the well-known flaws of the national economy, low competitiveness and labour productivity, unfavourable weather conditions, as well as the repercussions of the autumn elections upon the business environment. The conclusions have been presented today, the 15th of June, at a press conference launching the quarterly publication “Real Economy”.

According to the experts of the Independent Think Tank “Expert-Grup”, the risk of the electoral factors will materialise into the reluctance of private companies to invest, which will cause repercussions for bank lending. In addition, a series of pre-electoral initiatives that have already been launched, such as the “Good Roads for Moldova” program or the “Chisinau Arena” complex, all lacking a clear budget coverage, threaten to affect the stability of the public finances. The lack of rainfall could also affect this year’s economic growth, compromising more agricultural crops, although in the first months, the agricultural production, especially that of animal origin, has registered a marginal increase.

Although the majority of the branches of the national economy have registered positive growth in the first quarter of 2018 – a tendency supported as well by increasing public investment, the appreciation of the Moldovan Leu limits the growth prospects of the economy, by way of lowering the purchasing power of remittances and rising the export costs.

In addition to the main developments in the economic sectors in the last quarter, the June edition of “Real Economy” analysed as well the quality of the launched policies and initiatives and how they respond to the challenges of the national economy. Thus, experts consider that some of them are predominantly anchored in electoral interests and are not contributing to the welfare of the country, being rather populist. An example in this regard is the “Good Roads for Moldova” program. “The legal framework approved by the Government on financing the “Good Roads for Moldova” program has neither proper justification nor clear financial coverage. This program is planned to be partially funded from the Road Fund (about 51% of the total Fund volume). Sources to fund the remaining part of the program were not indicated, stating that investments will be made “when the necessary financial resources are accumulated”. Thus, at least MDL 366 million of the program budget are not covered” states Iurie Morcotîlo, economist at the Independent Think Tank “Expert-Grup” and co-author of the publication.

The experts have also analysed the decision of the National Agency for Energy Regulation to raise fuel price ceilings, stating that although it seems to justifiably apply the pricing methodology, the core of the problem is related to the overly generous trade margin included in the respective methodology. In order to solve this issue, it is necessary to increase the involvement of the Competition Council in order to detect and combat possible anticompetitive practices on the petroleum products market. Boosting competition is the main tool that will allow for a sustainable fair price setting.