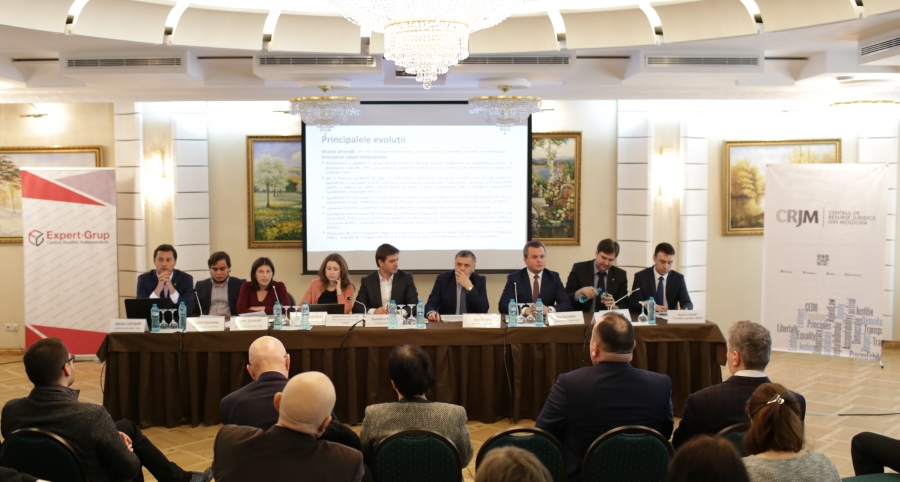 The Independent Think Tank ‘Expert-Grup’, the Association for Participatory Democracy ‘ADEPT’ and the Legal Resources Centre from Moldova, with the support of USAID, finalized the process of monitoring the implementation of Priority Reform Action Roadmap undertaken by the Government and the Parliament for the period of July – 31 December 2017. The experts monitored the implementation of priority policies in two core areas: (i) development of good governance and rule of law, with a focus on the public administration reform, justice and anti-corruption and fundamental rights and freedoms; and (ii) economic development and functioning market economy, with a focus on the governance of the financial and banking sector; investment and business climate; agriculture and food safety; education, culture, science; and social programs.

The monitoring exercise concluded that about one half of the actions covered by the Priority Reform Action Roadmap were implemented, with the level of implementation estimated to about 55%: of the total of 51 planned actions, only 28 were implemented. Furthermore, 10 of implemented actions were rated as ‘implemented with concerns’, with reasons ranging from non-observance of the decision-making transparency to content-related issues requiring substantial improvements. At the same time, 22 actions, or 43% of the total, were initiates, but not completed. The main reasons for breaking deadlines are too ambitious timeliness, as well as public administration reform that temporarily affected the pace of reforms in general and the implementation of measures set out in the Roadmap in particular.

The highest level of implementation was estimated in the field of ‘Governance in the financial and banking sector’. Thus, of the 8 actions planned in this field, 6 actions were implemented without deficiencies, 1 – with deficiencies and 1 – initiated but not completed. Such a high level of implementation is the result of the pro-active orientation of the institutions from this sector (particularly the NBM), including in the context of the Memorandum with IMF. In contrast, the field ‘Justice and fight against corruption’ registered the weakest progresses – 9 of 10 planned actions were initiated but not completed. The causes of such a negative performance are probably related to poor institutional capacity, weak political will and too ambitious timeliness. In the field of ‘public administration reform’, 5 of 6 planned actions were implemented with concerns. The main reason is that this reform, although implemented at a relatively high pace, is not based on functional reviews and empirical evidences, being thus perceived rather a political reform.

On a general note, the experts expressed concerns about the increasing use of roadmaps as instruments for policy planning and boosting reforms. The problem is that this Roadmap does not contain performance indicators and does not provide for the allocation of financial resources for its implementation. In addition, the document foresees urgent actions, which need to be implemented in the short run without any reference to the development visions at sectoral level and without taking into account the already adopted strategies, which can undermine their implementation. At the same time, inclusion, in the Roadmap, of some actions already provided for in the existing sectoral action plans but with different deadlines creates confusions for implementing institutions. Thus, the frequent use of roadmaps reveals a deficient management in public institutions or a weak political will, which mobilizes only under the influence of certain external factors. Experts recommend giving up at or using such roadmaps in exceptional circumstance. The authorities should respect the decision-making process rules in developing, adopting and implementing effectively the public policy documents.