Chișinău // The reforms started by Moldova’s State Fiscal Service in 2014-2015 brought tangible results. Despite economic recession, decline in consumption and macroeconomic instability, these reforms brought 1.8 – 2,3 billion lei in tax revenues to the budget, due to improvements in interaction with taxpayers and reduction of time and costs when paying the taxes. Conclusions belong to a report published by Expert-Grup Think-Tank with the support from Swedish Embassy in Moldova.

The reforms implemented by the Moldova’s main tax body with the support from th Swedish Government and other donors (The World Bank, IMF, USAID/BRITE and EU), were aimed at increasing the efficiency of tax administration and stimulating the voluntary fiscal compliance by easing the communication and interaction between fiscal authorities and taxpayers.

Following these initiatives, interaction with taxpayers has improved – thanks to reducing the number of tax inspections, simplifying fiscal procedures and developing online tools, which in turn accelerated communication, document compliance and the processing of tax applications. As a result, the year 2015 registered a 20% increase in fiscal declarations compared to 2014 and, for the first time in the history of the Fiscal Service, the fiscal debts declined - by MDL 638.7 million compared to 2014.

In addition, the relevant international rankings reflected the positive trends. The World Bank’s Doing Business report notes that the number of fiscal payments in a year decreased from 49 in 2011 to just 21 in 2016, while the time to complete tax payments diminished from 228 hours to 186 in the last five years.

These improvements took place on the background of reforms aimed at improving the tax administration and incentivising tax compliance, implemented by the Tax administration with the consistent help of Moldova’s key development partners. “Given that during 2014-2015 there were few reasons that could boost the tax collections, we can reasonably consider that these performances owed primarily to recent reforms”, said Adrian Lupușor – Expert-Grup executive director and author of the report. 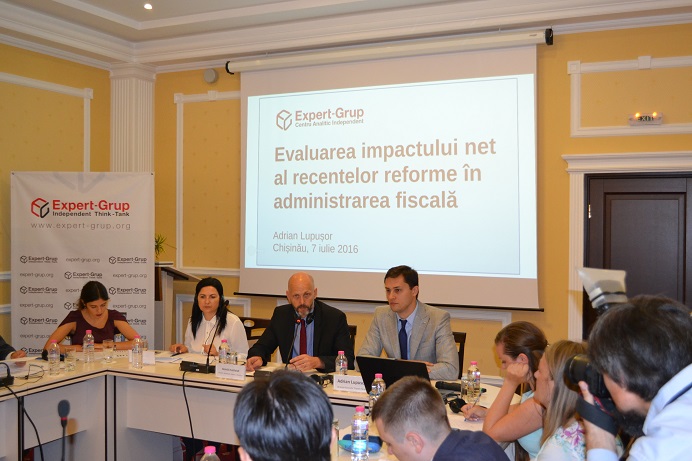 The report has been published during a public event that was attended by representatives from Ministry of Finance, Fiscal Service, donoros, experts and civil society

In the same time, the study asserts the need to eliminate the key constraints that would guarantee the irreversibility of the initiated reforms. „The main challenges relate to internal difficulties within fiscal organs, such as insufficient planning of activities, frequent relocation of employees among different jobs and departments, lack of relevant reporting, and uncertainty about work objectives among employees. Worse, the Fiscal Service administration remains dependent of the Ministry of Finance, which significantly limits their exercise of authority. Addressing these challenges in the near future could set the Fiscal Service on a sustainable development process, with positive spillovers for the entire economy”, added Lupușor.

This study has been published by Expert-Grup with the support from Swedish Embassy in Chisinau. Opinions expressed in this document belong to the authors and do not necessarily reflect the views of the donor.