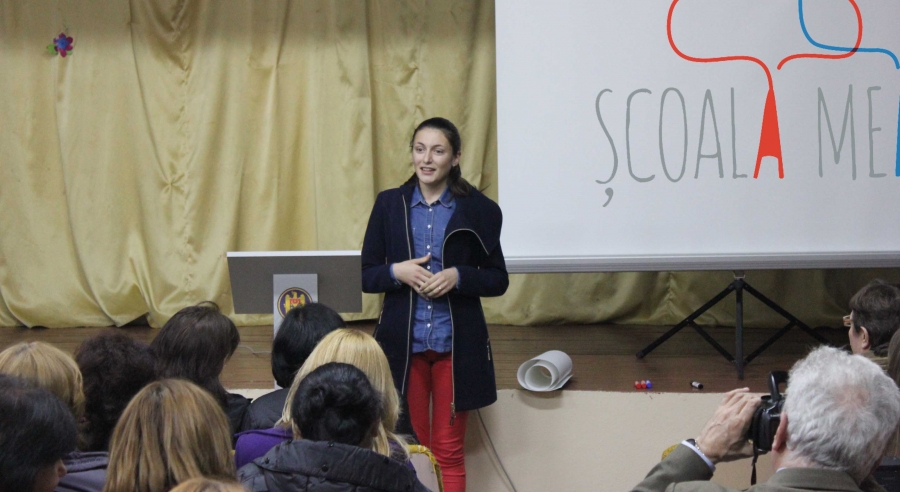 ”Scoala Mea” initiative (eng. trans. “My School”) has organized, over the past two months, public hearings at the 20 beneficiary schools, where over 2,800 citizens - students, teachers, parents and representatives of local and regional authorities participated. During the public hearings, citizens were able to take collective decisions on schools’ issues and development priorities. In addition, school principals presented to the community the progress in implementing educational reform in the institution, budget expenditures in recent years and the draft budgets for 2016.

There were hundreds of proposals submitted and dozens of decisions taken during the public hearings: at the high school in the village of Magdacesti, following requests from citizens, the representative of the District Council who attended the event has decided to allocate funds for roof repairs. At "Onisifor Ghibu" high-school from the city of Orhei, at pupils’ proposal, it has been decided to extend the meal breaks, in order to allow students to take a more a consistent lunch. At the public hearing in the "Vasile Alecsandri" high-school in Ungheni, citizens opted for establishing an Eco Park in front of the school, but also to set up a separate class for technological education.

Interim Deputy Minister of Education – Nadia Cristea, who attended the public hearings at the "Onisifor Ghibu" high-school in the capital Chisinau, stressed the importance of public hearings: "This event serves as further evidence about the need for public discussions. The fact that there is a large number of parents being present at this event is welcoming and encouraging. The main goal remains to involve everyone in the decision-making process, and the role of parents is bigger every time when there is a right mindset triggering involvement. For this reason, we need more events like these, which promotes feelings of personal and financial accountability to citizens,” said the Deputy Minister.

The parents also welcomed this activity: "I appreciate the courage and audacity of the school administration to present the budget and to be transparent. I believe this project will benefit all”, said one parent at the “Ion Luca Caragiale” high-school from Orhei.

Victoria Vlad, “Scoala Mea” coordinator and economist at Expert-Grup, said: "The public hearings lay the foundation for a social accountability process in education, therefore students and parents, together with public authorities, businesses and civil society organizations are coming togetherto solve the schools’ issues.”

The benefits of “Scoala Mea” are becoming even bolder at the institutions which began its implementation last year. At “Alecu Russo” high-school in the village of Sangereii Noi, after parents made a series of proposals to the school administration at last year’s public hearings, related to students’ transportation, toilet facilities, water supply and school furniture, the new school principal, appointed in 2015, has taken these proposals into consideration and implemented them.

It is also important to note that by now 11 educational institutions have expressed an intention to hold public hearings independently. Moreover, the project initiators urge all schools in the country to organize public hearings, and other civic engagement activities, in order to convince themselves of the benefits these processes entail. All the guidelines and instructions can be found on the Scoala Mea website – www.scoalamea.md.

Școala Mea initiative is implemented by the Independent Think-Tank Expert-Grup and its regional partners, with the support of the World Bank Group within the Global Partnership for Social Accountability, with the informational support of the Ministry of Education from Moldova. The project’s mission is to involve citizens, together with authorities in creating efficient, transparent and better schools.